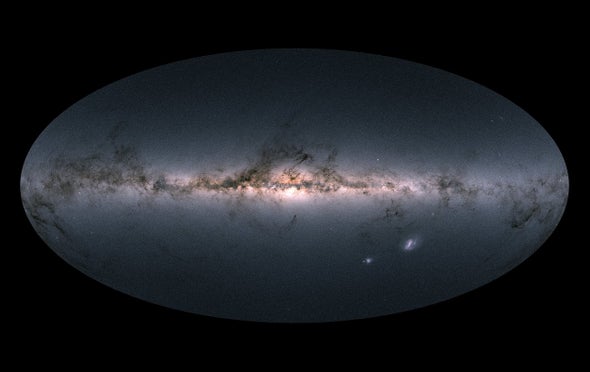 Great article! Our galaxy is far bigger, brighter and more massive than most others, Via Scientific American

To see how the Milky Way fits into the broad spectrum of galaxies, astronomers must survey all the types of galaxies that exist, from bright to dim. That’s most easily accomplished by looking closest to our own, where we can detect even the dimmest and most feeble of galaxies. In recent years, that search has yielded an explosion in the number of known galaxies nearby.

A clearer picture of our galactic neighbors began to emerge back in 1938, when Harvard astronomer Harlow Shapley inadvertently took the first step toward demolishing the notion that the Milky Way is an average galaxy. While looking at a photographic plate of the obscure southern constellation Sculptor, he noticed a faint smudge. Just a fingerprint or some other defect, he thought—until a second photographic plate of the same constellation showed the same smudge. Soon after, he found another smudge in the neighboring constellation of Fornax.

The smudges in Sculptor and Fornax were galaxies of a new type: ghostly ones that astronomers now call dwarf spheroidals. Dim and diffuse, with their stars spread out from one another, they don’t exactly beckon through a telescope. Both are among our closest galactic neighbors—so close, in fact, that they orbit the Milky Way, just as moons orbit a planet, making them satellite galaxies of our own. The Sculptor Dwarf Spheroidal is 280,000 light-years from Earth, and the Fornax Dwarf Spheroidal is 455,000 light-years away. And they are dim. Whereas the Milky Way emits 30 billion times as much light as the sun, Sculptor produces just 1.8 million solar luminosities and Fornax just 19 million.

Comments Off on The Mighty Milky Way #milkyway