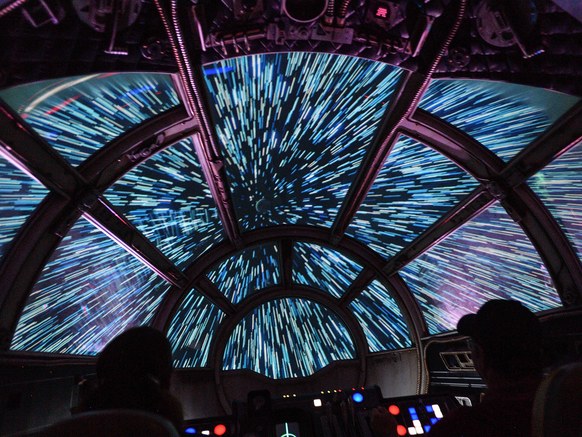 This Wired article takes a shot at applying some real world science to Star Wars!

Now for some data. All I need to do is measure the position of the sides of the Falcon and use that to calculate the angular size in each frame of the video during the jump to hyperspace. Of course there is a big problem. I don’t actually know the angular size at the beginning of the jump. I’m just going to have to estimate it. Let’s say that the Millennium Falcon is 25 meters wide and starts off at a distance of 100 meters from the camera. With that, I can set the angular field of view for the scene. This gives the following plot of angular size vs. time for that Falcon as it escapes.

What about the g-force? OK, let’s be clear about two points here. First, surely the Millennium Falcon has some type of “inertial damper” that allows people inside the ship to accelerate without dying. Second, Star Wars isn’t real life so it doesn’t matter (but it’s still fun to analyze). Now, for the g-force. This is a fake force. It’s a way to make an accelerating reference frame behave like a non-accelerating reference frame. In this case, the fake force is essentially just a measure of the acceleration of the inside of the Millennium Falcon.