Via Hackster.io, Skinflow uses liquid-filled silicon chambers for sensing. When a touch is applied, the fluid flows out of the manipulated chambers, which can then be measured remotely using a camera-based system or other means.

They have built a 3-D soft touchpad that consists of two sensor layers oriented at 90 degrees to each other, which both have eight macrochannels filled with colored liquid. In this implementation, Skinflow was used to measure the position and intensity of a user’s touch.

Skinflow sensors are remarkably low-cost, scalable and safe to use in human environments. In their study, the researchers presented three possible implementations for their sensor. First, they used it to create a soft button array with four pressure-sensitive buttons.

… the researchers integrated the sensor with a smart vision camera and microcontroller. They then connected three soft bend sensors to a device’s processing unit and used them to control the brightness of three LED lights in real-time by bending them.

“Skinflow could have many applications including virtual reality, robotics, healthcare, smart homes, wearable tech and tele-manipulation,” Soter said. “It is also a very promising technology for applications where standard electronic components cannot be used due to electromagnetic interference, for example in magnetic resonance imaging (MRI) scanners, or radioactivity, for example in nuclear power plants.”

See more in Hacker News and TechXplore for more information. The project’s paper is available here, though behind a paywall. 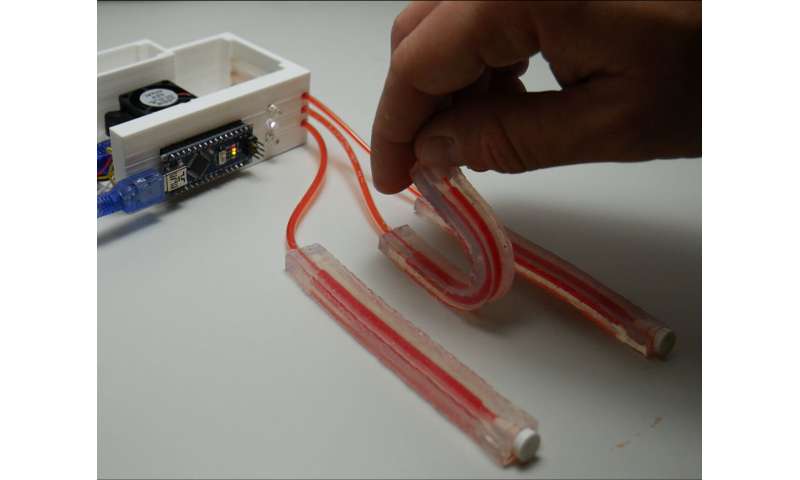 What are your thoughts about such sensors? Let us know in the comments below.