A detailed  history by Don Hopkins describes the evolution of PizzaTool, a 1990s app on Solaris 2, and accidentally ordering a pizza over the internet.

DESCRIPTION
PizzaTool is a NeWS and TNT application that lets you select a pizza by choosing toppings from checkboxes and menus, and preview a drawing of your pizza in a round spinning window.

The main PizzaTool window has some buttons, menus, and text fields that you can use to configure your order. The “Pizza Parlor” menu selects between various pizza servers. The “Topping…” “Preview…” and “Edit…” buttons pop up associated control panels. The “Order!” button sends your order to the pizza server. You need to fill in your name and address so they know who you are and where to deliver your pizza.

The Topping panel has a “Preview…” button that pops up the pizza preview panel, and an “Order!” button to send your order, like the main PizzaTool window. There are settings to select how big a pizza you want, and to choose a whole or a half pizza. There is an abbreviated menu button for selecting popular pizza styles, and lots and lots of checkboxes, for selecting individual toppings. The field at the bottom of the panel displays the estimated cost of the currently selected pizza.

Popping up the pizza Preview panel paints a picture of the particular pizza you’ve picked. The round pizza is magically suspended in the hollow frame (it’s supposed to be that way), and you can resize the frame to get a closer look at the pizza. Pressing the MENU button over the pizza pops up a menu of popular pizza styles, and you can spin the pizza around with the SELECT button, to cook it.

BUGS: There is presently no way to pay off your tab.

Don goes into how pizzatool came to be, a tool to graphically order pizza from a local restaurant, to a corporate staple. The source code is even available!

PizzaTool is written in object oriented PostScript for The NeWS Toolkit on OpenWindows. And it’s got lots of comments to explain what’s going on.

It’s a programming example for The NeWS Toolkit, and it tests out and shows how to use all the different widgets, dialogs, drag and drop, lightweight threading, and PostScript drawing. 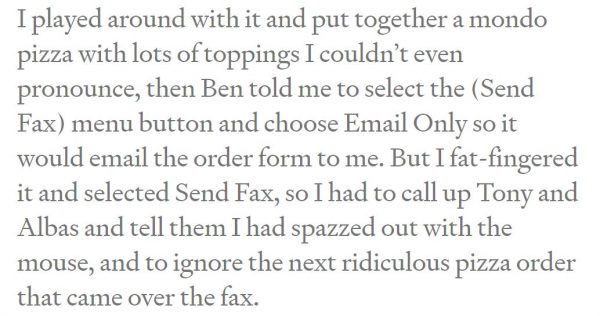 Read more about the interesting history of the early Internet, Sun, and how user interfaces came to be modernized.