Celebrating the Engineers behind the First Moon Landing 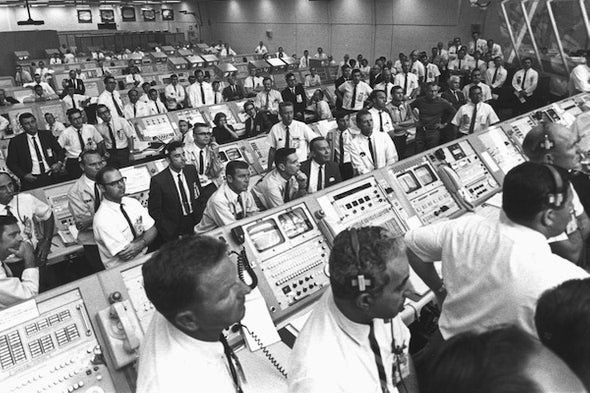 Scientific American has this retrospective on the early space program and the engineers behind it:

When John F. Kennedy announced his moon challenge to the nation in 1961, thousands of minds set fervently to work. Incredulous, they gazed at legions of imposing problems: unsteady, exploding rockets; a largely mysterious lunar surface; and trajectory calculations full of best guesses. With less than nine years to complete a lunar landing, the engineers didn’t have a script. As my father’s colleague Marlowe Cassetti put it, “I can think of a toddler taking a first couple of steps and being unsure, and then you say, ‘In a couple of years, he’s going to run a marathon.’”

In the end, the toddler of NASA stayed on its wobbly feet and eventually started running. The engineers survived “core dumps” and rainstorms to nail capsule reentry times. They not only found the numeric razor’s edge to the moon, but also choreographed an awkward orbital dance between a fragile little ship and the moon’s lumpy gravity. Eventually, they timed a landing with optimal shadow lengths for the photos, films and first steps of astronauts.

Comments Off on Celebrating the Engineers behind the First Moon Landing