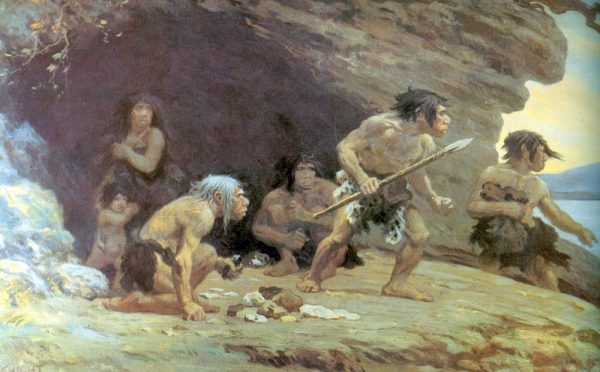 Stephen Mithen: The Neanderthals—there’s no evidence that they had language. But they must have had a sophisticated form of communication. They were just like humans, they might would have had to have told other people how they’re feeling, they would have had to look after their children and nurture them. They had to have made plans for group hunting and general movement. So what sort of communications system did they have? Now I came to the conclusion which must have been based on high degrees of musicality. Because we can see traces of that in our nearest living relatives. This seems to be the only form of communication with that language that would have been complex to allow them to have function as a social group, and yet not gone that extra step to modern language. So I think they communicated by using sets of phrases, almost like musical phrases that would have had semantic meanings, phrases such as something that would translate into “Let us share meat,” “We’ll go hunting” or “How are you feeling?” but would have been expressed in musical tones, different types of pitches, different types of rhythms. They might have used these also to build a sense of group identity, very much how we use music today, especially for caring for infants, you know just like we do today with our youngest children before they got language, we sing to them and move them rhythmically. I’m sure the Neanderthals would have been doing exactly the same.

Comments Off on Music and Neanderthal Communication #MusicMonday