Hypertalking on Twitter points out a Softalk article on archive.org – a step by step guide on how to build a Mac from February 1984. Steve Jobs wanted the most modern, efficient plant to hopefully build the most popular computer.

To assemble this mass-market machine, Apple wanted a new kind of factory, one that would surpass common expectations for output and efficiency and generally live up to the product it was to create. After wide research and study, and using ideas developed in the best of American and Japanese manufacturing technologies, the  Mac factory was constructed in Fremont, California, about thirty miles from Apple’s Cupertino headquarters. At full speed, the plant will be able to grow 1.2 million Macintosh Apples a year. 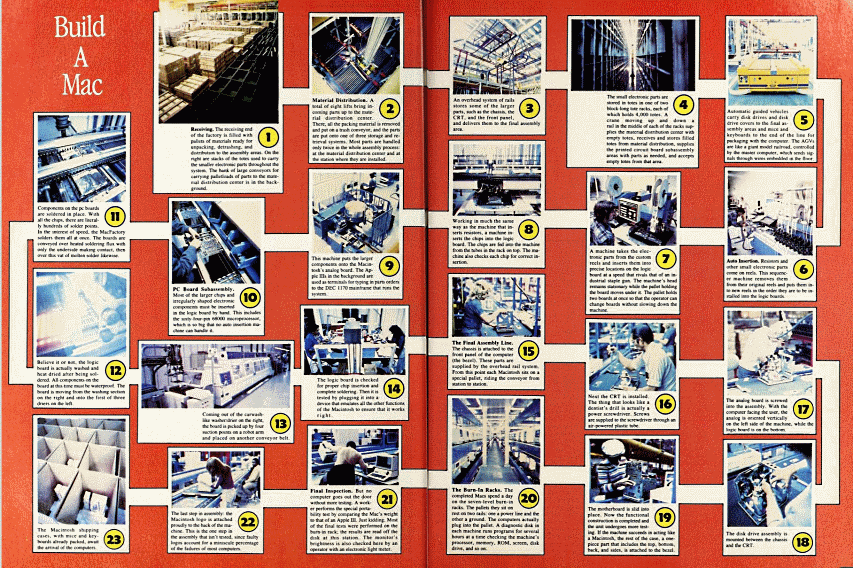 Apple chairman Steve Jobs and engineering manager Bob Belleville went to Japan two years ago to study Japanese manufacturing methods. They knew that Japan excelled in the area of manufacturing. By borrowing the solid production economies of the Japanese and implementing the best of American methods, Apple would be able to propel Macintosh’s production to the level they wanted. During their visits at companies such as Toyota, Yamaha, Panasonic, and Hitachi, Jobs and Belleville found efficient production and people who enjoyed their work. They also found a lot of factory automation.

The entire magazine issue is downloadable in several formats including ebook and PDF.

See the article on the Internet Archive here.

Are you a classic Mac fan? Let us know in the comments.

Comments Off on The step by step guide to build a Mac, Softalk Magazine February 1984 #Mac #Apple #VintageComputing @apple @internetarchive