The fundamental principle of Buy One, Give One (BOGO) is that every time a customer makes a purchase, the company in question arranges for a donation. This could be a direct donation of goods or services to an individual (often one described as “in need”), but could also take the form of a financial contribution to a charity. Pictured above is the marketing material for an effort Adafruit did with Digi-Key where for every Circuit Playground purchased at Digi-Key, another was donated to Girls Who Code.

TOMS shoes is the quintessential example of the Buy One Give One. Founded in 2007, it was a shoe company that began with the premise that, for every one pair of shoes purchased, it would donate a pair to people that might need them. To this day, it still receives a ton of press, praise, and criticism for the model it helped pioneer.

Before discussing any problems, it’s important to point out that marginal benefits are still benefits. If a pair of TOMS provides a small improvement to a person’s life, other things being equal, thats a net positive over a pair of Nikes. Multiplying that out over millions of people, those marginal benefits add up.

When TOMS worked with an outside research team to evaluate the impact of its shoe donations, the researchers were unable to find a way in which the shoes had much of a substantive impact on poor kids’ lives. The kids liked the shoes, and used them to play outside a little more often. But there was no significant improvement in their school attendance or self-esteem.

“Significant improvement” is quite a bar, but on the other hand, if these efforts are actually harmful, that’s another story.

NYU economics professor Bill Easterly, for example, once called TOMS the “worst charity in development,” while Ashoka’s Valeria Budinich told the New York Times that its model does little to address the root causes of poverty, and may even reduce demand for locally-produced products.

[The founder of TOMS], to his credit, has admitted that his critics were right, and has since tried to support activities that better “alleviate” poverty, including launching shoe manufacturing operations in Haiti, staffed by locals. Small steps, better outcomes.

Over time, TOMS has indeed been changing its philanthropic model. It’s both a credit to TOMS and also an important indicator of the market and businesses participating in it.

…a purchase of Toms sunglasses can [now] support cataract surgery and not just a free pair of glasses. If you buy coffee beans from Toms Roasting Co., you’re supporting community-owned water systems in areas that lack safe drinking water. Other one-for-one companies have also tweaked the basic model of buying a product and giving a product. Warby Parker does donate glasses, but it also trains people globally to perform basic eye exams and sell glasses for “ultra-affordable” prices, which may be a better model for communities.

The One for One, as TOMS calls it, is starting to resemble a literal BOGO less and less. It is becoming more like a Buy One, Donate (BOD). This is, perhaps, a good thing, but it’s also in line with the many changes similar BOGO companies are making. Warby Parker for example, doesn’t donate glasses itself, but instead donates money to a non-profit that provides free eyeglasses. More and more companies are popping up with various BOGO models. A 2014 report in the Stanford Social Innovation Review took a deep dive into this diverse market. 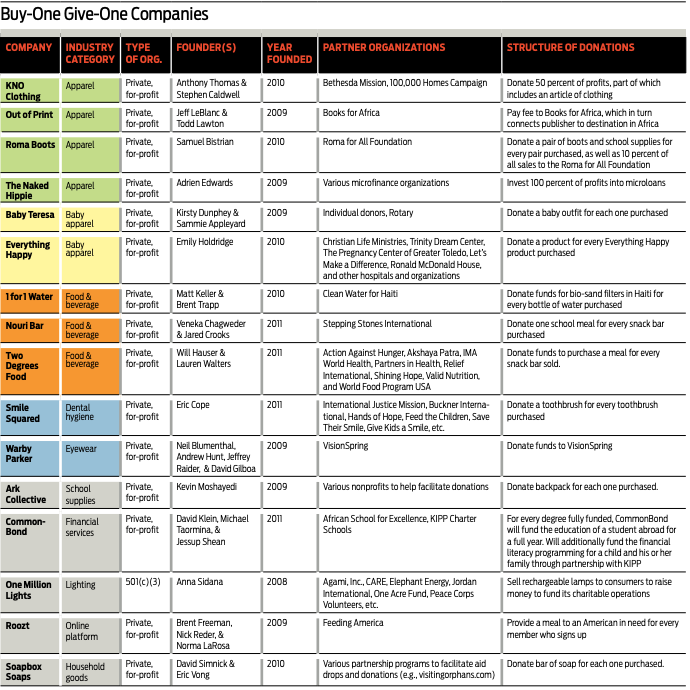 The paper has a few key things to say on the business aspects of all this:

There are various financial models

Buy One, Give One Benefits

Clearly there are a lot of different ways to fund and execute the “BOGO” strategy, and these companies are only a sample of the larger market. Ethical consumerism is on the rise, and as we enter a more and more globalist economy, there is increasing attention and emphasis on voting with dollars and doing good (or at least less harm) with the way people shop.

When you really get into the weeds here, the lines start to get blurry. Newmans Own is famous for donating 100% of its profits to charity. Is this a BOGO, a BOD? Because it’s not done in specific increments or goods it doesn’t have the status of other Buy One Give One companies, but the net effect is similar. IBM and many other companies do Matching Grants, where they will match donations made by their employees. Undoubtedly these funds are from its business operations that are made possible by consumer purchases. What does this make IBM? What does this mean about doing business with IBM.

Similarly, companies that use increased profits to pay its workers more, instead of making charitable donations, won’t be recognized in this market. Starbucks does more for its workers than Dunkin’, but a 401k match, or free college tuition, doesn’t have quite the same media pull as sending shoes to impoverished children. Is this type of benefit only to be considered a strategy of acquiring good employees or is there some social responsibility here as well?

Buy One Give One is just one specific type of ethical consumption. A 1:1 donation system is not the only way to manage this model and there will undoubtedly be changes in the landscape as the market evolves. It’ll be informative to keep an eye on these companies as they grow, fall away, and change strategy. In the meantime, there is a ton of research out there about these companies and the Stanford Social Innovation Review is a great place to get started.