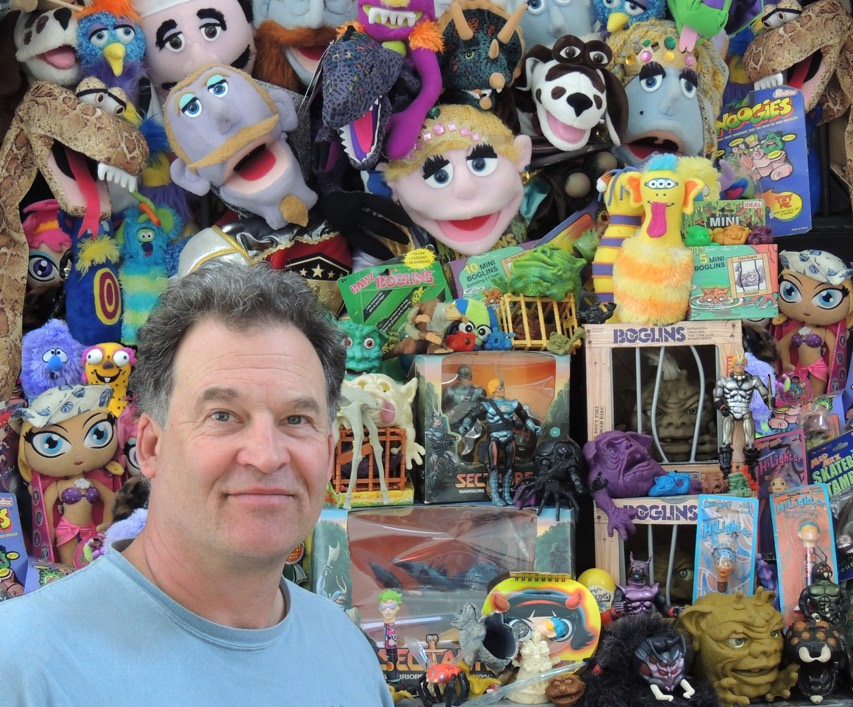 “For over 30 years Tim has been Inventing, Designing and Sculpting some of the most unusual toys to ever be marketed in the US and abroad. Once known as the “King of Gross” after co-creating in the 80’s Sectaurs (Coleco) and Boglins (Mattel). Tim now launches his new line of horribleness the “TOTIMS”

I love creating my own mythology. The world is filled with modern day mythological creatures you can find them in every nook and cranny of your bedroom closet.

Tim Started his career designing and building puppets for the Muppets. Most notable were the Mystics and the Slaves that he sculpted and designed for the movie the Dark Crystal guided by the incredible drawings of Brian Froud. He also worked on puppets for Sesame Street , Muppet Show and Fraggle Rock for which he created Traveling Matt. After Dark Crystal was launched he garnered his first toy sculpting gig with Hasbro creating the Garthim, Mystics and Lanstrider toys.

The Story of the 1987 Boglins Toyline – A Mini Documentary – YouTube.

“Boglins were a series of toy puppets distributed by Mattel. They were created by Tim Clarke, Maureen Trotto, and Larry Mass, and licensed by Seven Towns. The original run of Boglins was released in 1987, coinciding with a “creatures” craze that included Ghoulies, Critters, and Gremlins. Boglins were goblin-themed hand puppets made of flexible rubber and could be manipulated to represent speech and facial expressions. Several series of large and small Boglins were released until 1994, with additional aquatic, Halloween, and baby themed Boglins released later into the line. Small solid ‘Mini-Boglins’ were also produced, akin to the M.U.S.C.L.E. figures also from the 1980s.”