Via StarTrek.com, a view on how the Smithsonian Museum restored the original model of the Star Trek Enterprise (“… no bloody A, B, C, or D…”).

Stardate 1601.28: After a year of extensive research, conservation work on the original studio model of the USS Enterprise is now underway in the Museum’s spacedock. Our goal is to stabilize the model and return it to its appearance from August of 1967, during the filming of the episode “The Trouble with Tribbles,” which marked the last known modification of the ship during the production of Star Trek.

The model appeared in all 79 episodes of The Original Series, and was donated to the Smithsonian in 1974. It will go back on public display in the Boeing Milestones of Flight Hall this year, in time for the Museum’s 40th birthday in July and the 50th anniversary of Star Trek in September. Visitors to our third annual Open House at the Steven F. Udvar-Hazy Center on Saturday, January 30 can catch a glimpse of the work in progress. 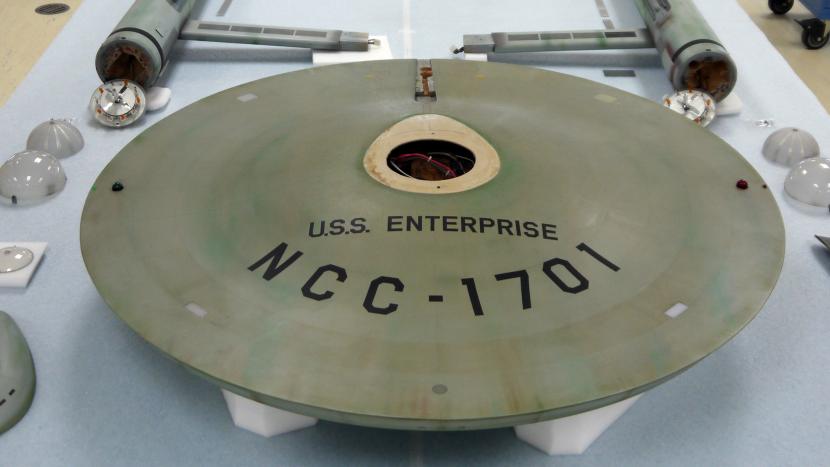 This model is quite big, over ten feet long!

To analyze the model’s original materials and understand how they are aging, metal sections of the model were analyzed with X-ray fluorescence (XRF) and plastic sections were sampled and sent to the Art Conservation department at SUNY – Buffalo State in Buffalo, NY. Conservation scientists Dr. Aaron Shugar and Dr. Rebecca Ploeger used μ‐FTIR spectroscopy and μ‐XRF spectrometry to determine the specific adhesives and polymers used in the model’s construction. “Our analysis identified two original adhesives on the secondary hull: a clear poly(vinyl acetate) and a brown animal glue bulked with barium, strontium, and calcium. The plastic bolt cover fin and nacelle ribbed end caps are made from clear poly(methyl methacrylate), commonly known as Plexiglas,” said Dr. Shugar.

And for modernization: NeoPixel LEDs!!

For the final touch of Hollywood magic, our Museum specialists Zabih Sadighian and Larry Berger are designing a safe LED system to light the windows from within the ship. The system uses flexible RGB LED NeoPixel strips that are adjustable and programmable remotely, allowing us to control the intensity, color temperature, and blink pattern to match original visual effects seen in the series.

See the whole process in the article here.