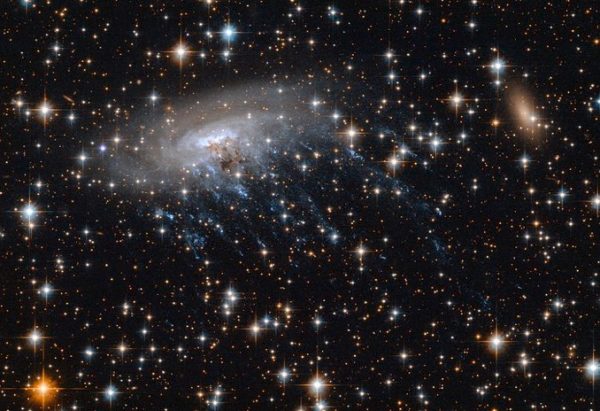 Galaxies plowing through the gas and dust permeating vast clusters can leave trails in their wakes made up of material torn away in a process known as ram-pressure stripping. A spiral galaxy known as ESO 137-001 is a well-known example of this spectacular phenomenon, taking on the appearance of a jellyfish trailing long tentacles through space. The Hubble Space Telescope sees hints of the stripped-away material while the Chandra X-ray Observatory reveals an enormous stream of hot gas streaming away into space. Now, the Atacama Large Millimeter/submillimeter Array, or ALMA, radio telescope, working in concert with the European Southern Observatory’s Very Large Telescope, has allowed astronomers to map out cold molecular gas in the trailing clouds.

Comments Off on Fresh Look at a Cosmic Jellyfish #SpaceSaturday