UPDATE – They’re back from now – Twitter. All programming will resume and the next court date is October 18th 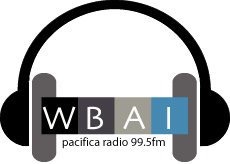 “Financial woes forced the community radio station WBAI to abruptly shut down Monday morning after decades on the air in the latest loss to New York City’s local news industry. The Pacifica Foundation, WBAI’s California-based nonprofit parent, announced the move to staffers in a letter and blamed the station’s demise on “ongoing and continued projections of further financial losses.”

If you listen to Off the Hook, here is a post on 2600 about the show and what’s going on as well …

“On the morning of October 7, 2019, staffers at WBAI in New York were locked out and all programming suspended. According to the Pacifica Foundation (parent of WBAI), this was done due to “serious and persistent financial losses at WBAI.” This necessitated the foundation laying off all the staff.

So for now, “Off The Hook” is off the air. Yes, we can always do a podcast, but we’re a radio show and half the magic is reaching those people who aren’t on the net while also talking to those who are. We intend to fight to preserve that. We hope you join us.” 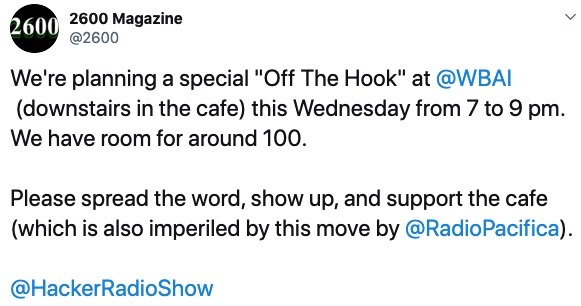 Read more and check out the plans for Weds…

Filed under: NYC — by phillip torrone