Frances Elizabeth “Betty” Holberton was one of the six original programmers of the first general-purpose electronic digital computer, ENIAC. She also invented breakpoints in computer debugging 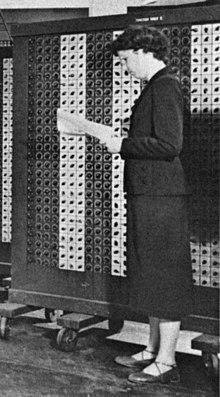 She was one of those who wrote the first generative programming system (SORT/MERGE). Holberton used a deck of playing cards to develop the decision tree for the binary sort function, and wrote the code to employ a group of ten tape drives to read and write data as needed during the process. She wrote the first statistical analysis package, which was used for the 1950 US Census.

In 1953 she was made a supervisor of advanced programming in a part of the Navy’s Applied Math lab in Maryland, where she stayed until 1966. Holberton worked with John Mauchly to develop the C-10 instruction set for BINAC, which is considered to be the prototype of all modern programming languages. She also participated in the development of early standards for the COBOL and FORTRAN programming languages with Grace Hopper. Later, as an employee of the National Bureau of Standards, she was very active in the first two revisions of the Fortran language standard (“FORTRAN 77” and “Fortran 90”).