Grace Hopper  was an American computer scientist and United States Navy rear admiral, one of the first programmers of the Harvard Mark I computer, and a pioneer of computer programming who invented one of the first linkers. Her legacy was an inspiring factor in the creation of the Grace Hopper Celebration of Women in Computing. 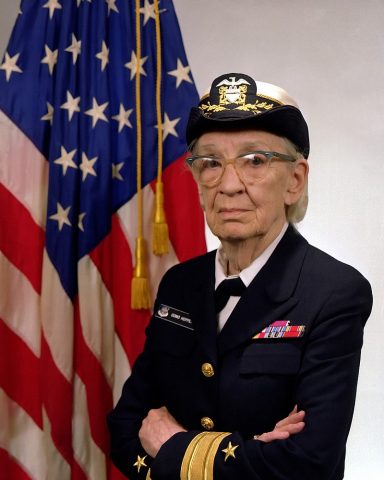 Perseverance was on of the personality traits that made Grace Murray Hopper a great leader. On her arrival at Cruft Laboratory she immediately encountered the Mark I computer. For her it was an attractive gadget, similar to the alarm clocks of her youth; she could hardly wait to disassemble it and figure it out. Admiral Hopper became the third person to program the Mark I. She received the Naval Ordnance Development Award for her pioneering applications programming success on the Mark I, Mark II, and Mark III computers.

A true visionary, Admiral Hopper conceptualized how a much wider audience could use the computer if there were tools that were both programmer-friendly and application-friendly. In pursuit of her vision she risked her career in 1949 to join the Eckert-Mauchly Computer Corporation and provide businesses with computers. There she began yet another pioneering effort of UNIVAC I, the first large-scale electronic digital computer. To ease their task, Admiral Hopper encouraged programmers to collect and share common portions of programs. Even though these early shared libraries of code had to be copied by hand, they reduced errors, tedium, and duplication of effort.

By 1949 programs contained mnemonics that were transformed into binary code instructions executable by the computer. Admiral Hopper and her team extended this improvement on binary code with the development of her first compiler, the A-O. The A-O series of compilers translated symbolic mathematical code into machine code, and allowed the specification of call numbers assigned to the collected programming routines stored on magnetic tape. One could then simply specify the call numbers of the desired routines and the computer would “find them on the tape, bring them over and do the additions. This was the first compiler,” she declared.

Admiral Hopper believed that the major obstacle to computers in non-scientific and business applications was the dearth of programmers for these far from user-friendly new machines. The key to opening up new worlds to computing, she knew, was the development and refinement of programming languages – languages that could be understood and used by people who were neither mathematicians nor computer experts. It took several years for her to demonstrate that this idea was feasible.