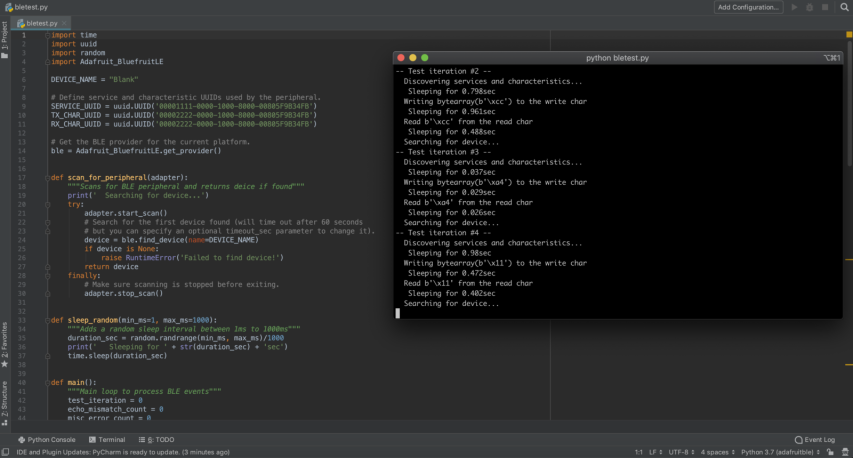 When developing a Bluetooth Low Energy peripheral, it’s often useful to have an app that can connect to and test the peripheral to ensure it’s working as expected. If, however, you don’t already have a companion app for the device, you’d either have to write one from scratch, or use an existing app, such as our flagship mobile app LightBlue® (available on Android and iOS).

LightBlue® allows you to connect to Bluetooth Low Energy devices, read and write to characteristics, subscribe to notifications, and a lot more. Though it’s a powerful tool, you’ll probably need a way to automate more complex tests for long-term development. This is a situation where we can leverage the rapid prototyping capabilities of Python and write a script that emulates a BLE client.

As luck would have it, we recently worked on a device that had a flaky BLE connection with its companion mobile app. We’ll break down how a Python script and Adafruit’s BluetoothLE library was used to test the robustness of the BLE connections, and figure out whether the source of the issue was the mobile app or the device itself.

The nice thing about Adafruit’s BluefruitLE library is that it works on both Linux and macOS. Under the hood, it uses BlueZ on Linux and CoreBluetooth on macOS, but it abstracts away all platform-specific BLE code behind the API. We should also note that this library does not support Windows. For Windows development, an alternative could be to use PyGatt with a BlueGiga dongle.

See the article for details on this implementation and see this guide on using the Adafruit Bluefruit LE Python Library.