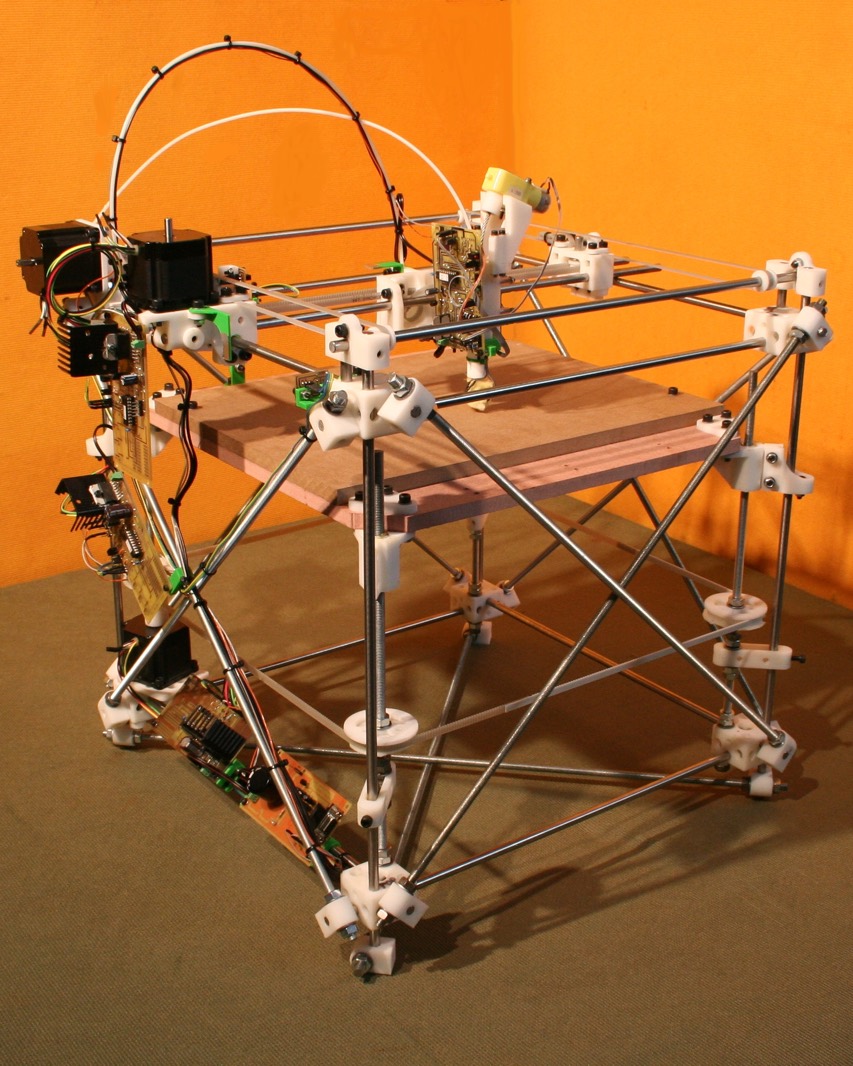 What is the RepRap project? From Wikipedia.…

The RepRap project started in England in 2005 as a University of Bath initiative to develop a low-cost 3D printer that can print most of its own components, but it is now made up of hundreds of collaborators world wide. RepRap is short for replicating rapid prototyper.

As an open design, all of the designs produced by the project are released under a free software license, the GNU General Public License.

Due to the ability of the machine to make some of its own parts, authors envisioned the possibility of cheap RepRap units, enabling the manufacture of complex products without the need for extensive industrial infrastructure. They intended for the RepRap to demonstrate evolution in this process as well as for it to increase in number exponentially. A preliminary study claimed that using RepRaps to print common products results in economic savings.

RepRap was founded in 2005 by Dr Adrian Bowyer, a Senior Lecturer in mechanical engineering at the University of Bath in England. Funding was obtained from the Engineering and Physical Sciences Research Council. 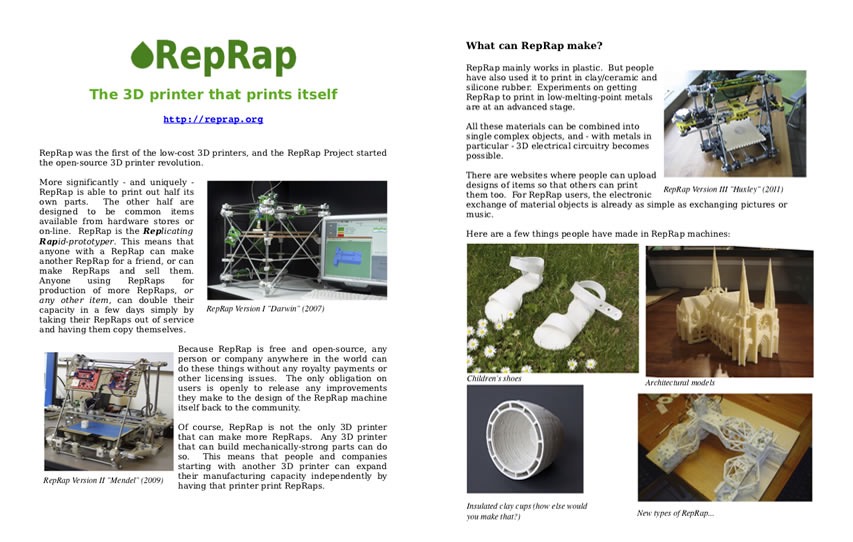 There is a RepRap wiki and about page with even more details… And a one pager’ PDF (mirror).

Who is Dr Adrian Bowyer MBE? From the Dr’s about page…

I did a first degree in mechanical engineering at Imperial College in 1973, and then did a PhD in tribology there.

In 1977 I moved to Bath University’s Department of Mathematical Sciences to do research in stochastic computational geometry.

I then spent several years as the head of Bath’s Microprocessor Unit in what is now Bath University Computing Services.

In 1984 I took up a lectureship in manufacturing in Bath’s Department of Mechanical Engineering and was subsequently promoted to senior lecturer. I retired in 2012 to concentrate on the RepRap Project and my company RepRap Ltd.

My main areas of research are geometric modelling and geometric computing in general (I am one of the creators of the Bowyer-Watson algorithm for Voronoi diagrams), the application of computers to manufacturing, the creation of smart hydrophilic-polymer gels using affinity interactions, and the engineering use of biology, called Biomimetics.  In Biomimetics I work on self-copying and self-assembly in engineering.

I am the originator of the worldwide RepRap Project - a project that has created humanity’s first general purpose self-replicating manufacturing machine. It works using 3D printing. I am also a founder and director of RepRap Ltd – a company formed to do research and development in self-replicating open-source 3D Printing.

In May 2017 I received the 3D Printing Industry Outstanding Contribution to 3D Printing Award.

In September 2017 I was inducted into the 3D Printing Hall of Fame.

In the New Year’s Honours List for 2019 Her Majesty the Queen kindly awarded me an MBE for services to 3D printing.

23 March 2005
The RepRap blog is started and research begins.

Summer 2005
Funding for initial development at the University of Bath of £20,000 is obtained from the UK’s Engineering and Physical Sciences Research Council.

13 September 2006
The RepRap 0.2 prototype successfully prints the first part of itself, which is subsequently used to replace an identical part originally created by a commercial 3D printer.

9 February 2008
RepRap 1.0 “Darwin” successfully makes at least one instance of over half its total rapid-prototyped parts.

14 April 2008
Possibly the first end-user item is made by a RepRap: a clamp to hold an iPod securely to the dashboard of a Ford Fiesta.

29 May 2008
Within a few minutes of being assembled, the first completed “child” machine makes the first part for a “grandchild” at the University of Bath, UK.

23 September 2008
It is reported that at least 100 copies have been produced in various countries. The exact number of RepRaps in circulation at that time is unknown.

30 November 2008
First documented “in the wild” replication occurs. Replication is completed by Wade Bortz, the first user outside of the developers’ team to produce a complete set for another person.

2 October 2009
The second generation design, called “Mendel”, prints its first part. The Mendel’s shape resembles a triangular prism rather than a cube.

January 2009
MakerBot Industries is founded by RepRap volunteers and others to sell 3D printers based on RepRap that are open-source, but are not self-replicating. MakerBot was the first company based on RepRap.

27 January 2010
The Foresight Institute announces the “Kartik M. Gada Humanitarian Innovation Prize” for the design and construction of an improved RepRap. The administration of the prize is later transferred to Humanity+.

31 August 2010
The third generation design, “Huxley”, is officially named. Development is based on a miniaturized version of the Mendel hardware with 30% of the original print volume.

2011/2012
RepRap and RepStrap building and usage are increasing within the technology, gadget, and engineering communities. RepRaps or commercial derivatives have been featured in many mainstream media sources, and are on the permanent watch lists of such technology media as Wired and some influential engineering-professionals’ news media.

July 2013
The Gada Prize is awarded to RepRap Morgan, designed by Quentin Harley.

12 May 2015
The Dollo self-replicating 3D printer with a very high proportion of self-replicated parts is introduced by Ben and Benjamin Engel.

8 September 2015
RepRap Snappy is introduced by Revar Desmera of the Bay Area RepRap User Group. Like the Dollo it has a very high proportion of self-printed parts (73%) and assembly is achieved by clipping those parts together as opposed to using nuts and bolts.

January 2016
RepRapPro (one of many commercial RepRap companies, but one founded by Adrian Bowyer and others) announced on their website that they were to cease trading. The reason given was congestion of the market for low-cost 3D printers derived from the RepRap Project and the inability to expand in that market. 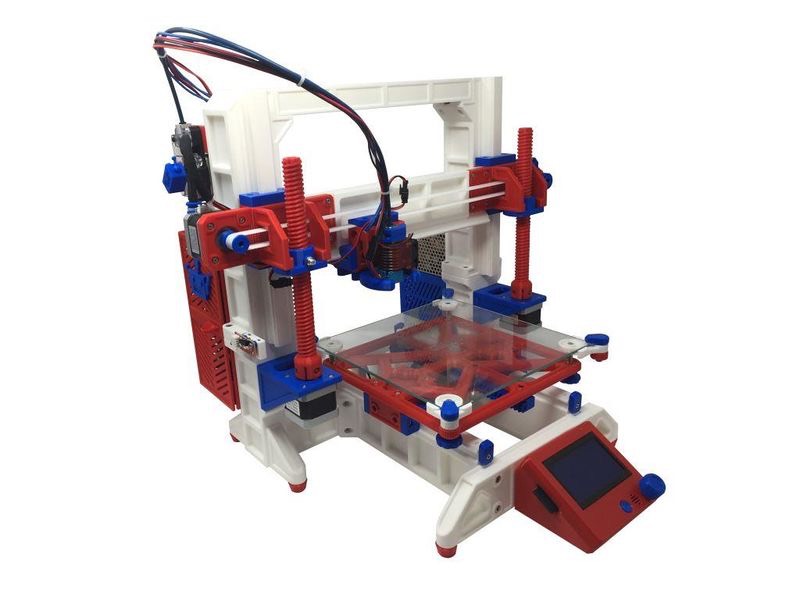 The latest addition to this list I’ll add here continues on the self-replication vibe that started it all, in March 2019, the Mulbot, a RepRap, an open source Mostly Printed 3D printer was published (video).