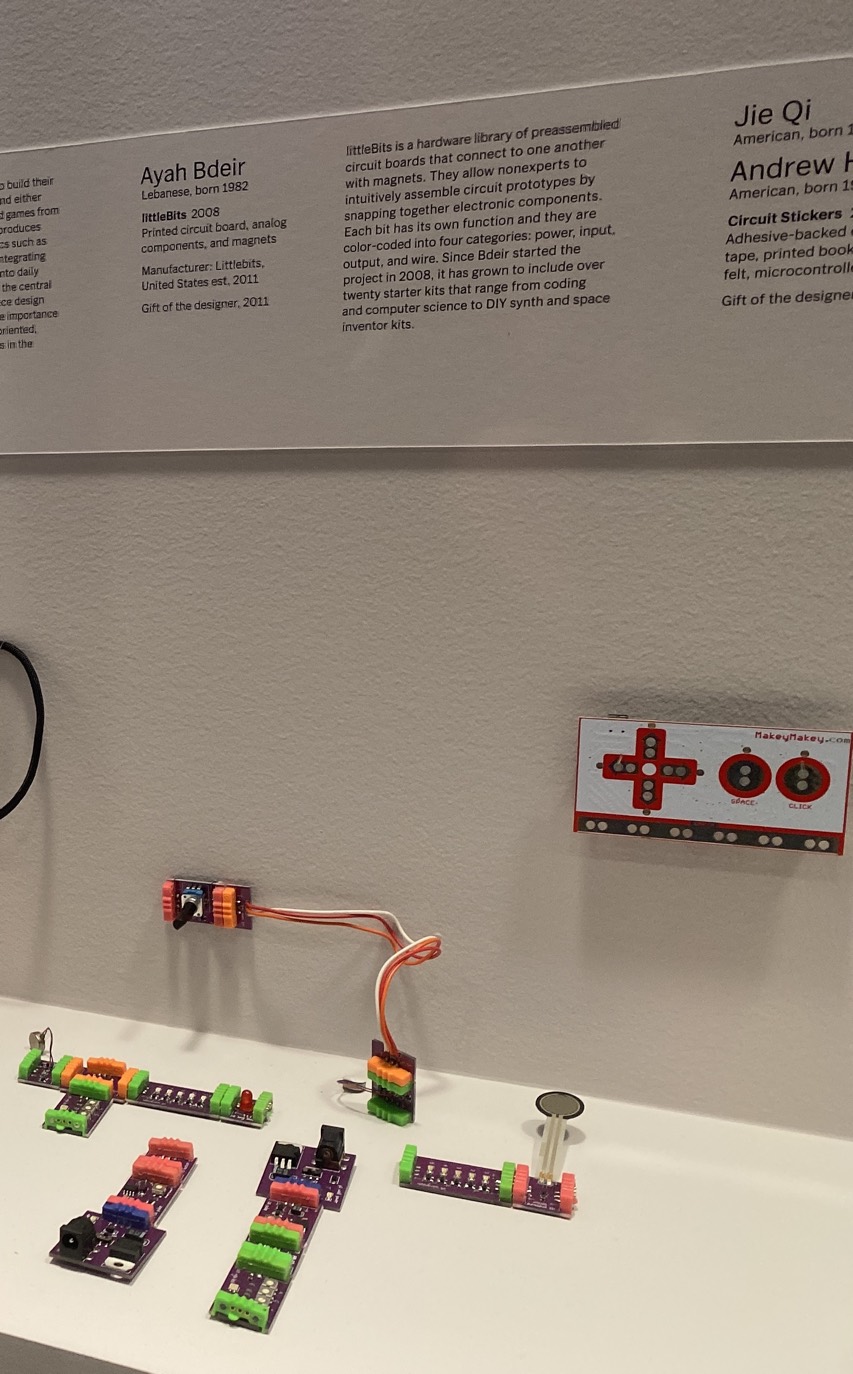 Last night we went to the MoMA (thank you Moritz Waldemeyer & Nazanin Farahbod of Studio Waldemeyer!) and while there, we checked out littleBits which is part of the collection at MoMA, this appears to be one the firsts in the permanent collection that also happens to be open-source hardware! Please post in the comments if there is something else that is open-source hardware and part of the permanent collection. If someone knows of code/art that is under an open-source license in the MoMA post up in the comments too. 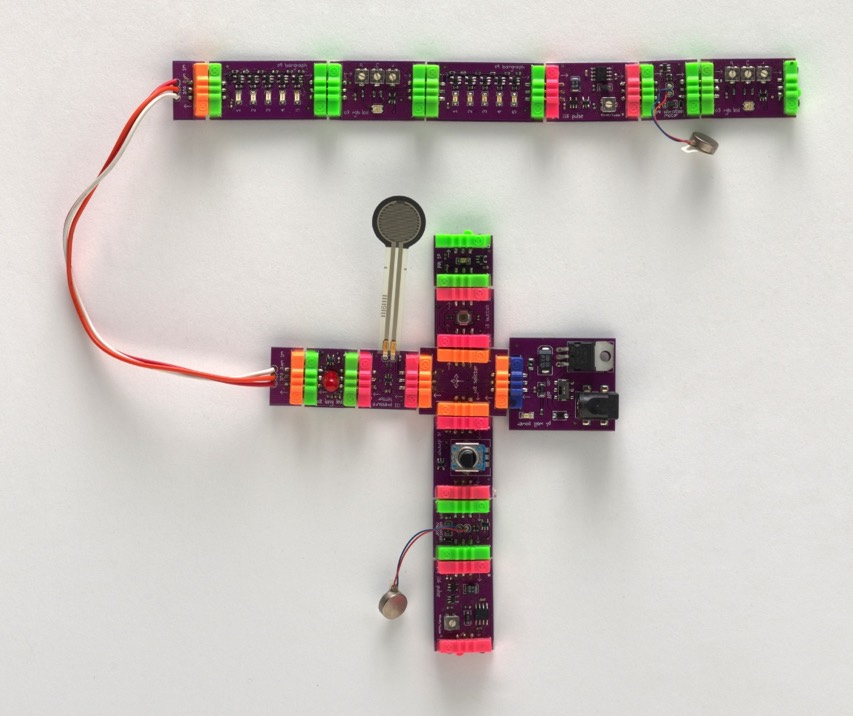 littleBits is a hardware library of preassembled circuit boards that connect to one another with magnets, allowing nonexperts to assemble circuit prototypes by snapping together electronic components in an intuitive process. There are over fifty littleBits modules, divided into four categories: power, input, output, and wire. The starter kit contains ten of them, including a pressure sensor, a vibration motor, a wire, and a wall power module.
Gallery label from Talk to Me: Design and the Communication between People and Objects, July 24 – November 7, 2011. 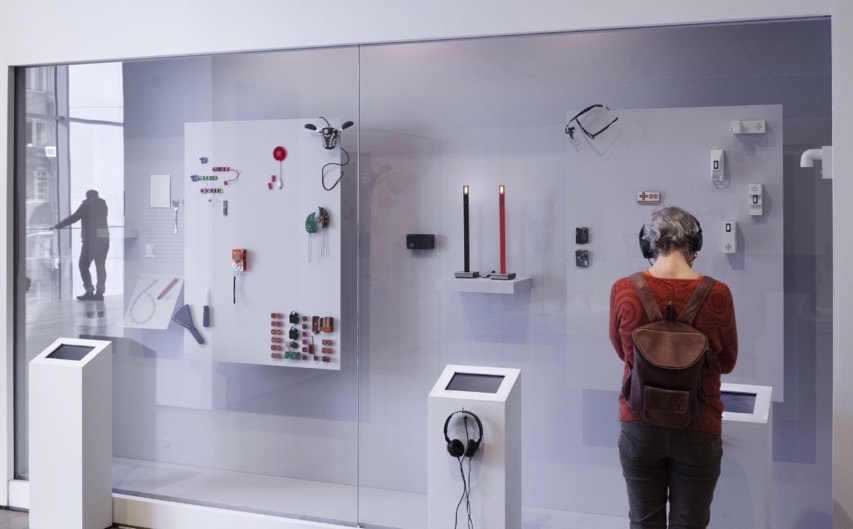 Arduino was featured in the This Is for Everyone: Design Experiments for the Common Good, February 14, 2015 – January 18, 2016. And Arduino is online at MoMA.

A tiny but powerful microcontroller, Arduino is an open-source, programmable microchip housed on (a circuit board, and a platform for some of the most compelling interdisciplinary design collaborations between science and the humanities happening today. It can be programmed to drive components such as sensors, LEDs, and motors in order to build and develop all kinds of interactive objects. Arduino allows artists, designers, and active maker-culture enthusiasts, as well as children and amateurs, to engage with processes and final products that are usually the domain of electronic engineers. This new building block of design has resulted in applications as diverse as light sculptures, digital pollution detectors, and tools to help people who are unable to use common interfaces such as a computer mouse.

There is also audio on the page as well. 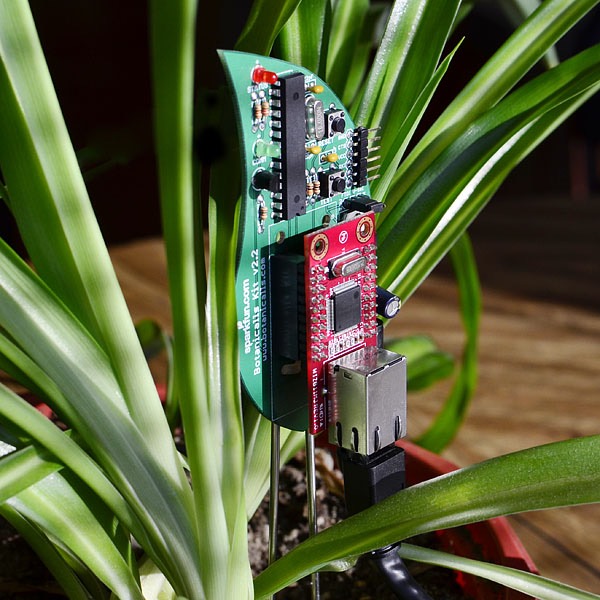 Searching around on the MoMa site, we also found Botanicalls which was part of an exhibit …

Botanicalls gives a voice to our voiceless everyday companions: house plants. Moisture sensors in a plant’s soil trigger messages that are sent to a human caretaker over a wireless network, opening up a playful yet useful line of communication about the plant’s needs. The messages are broadcast via Twitter or read aloud by a recorded human voice over the telephone; the plants are polite enough to send both distress calls and notes of thanks. Botanicalls enables just one form of interspecies communication, but its fresh use of sensor technology has a wide range of potential applications.
Gallery label from Talk to Me: Design and the Communication between People and Objects, July 24–November 7, 2011.

However, unless something has changed, the hardware is non-commercial, but does use open-source software, “This work is licensed under a Creative Commons Attribution-Noncommercial-Share Alike 3.0 United States License.” 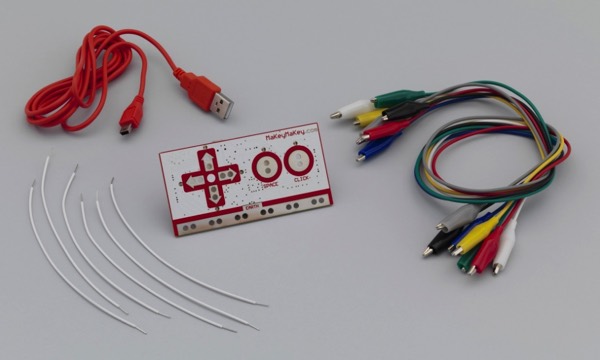 Makey Makey is also in there! It’s not clear to me if it’s the open-source one that SparkFun worked on (PDF), but either way, it’s at MoMA too.

Makey Makey is based on research undertaken by Silver and Rosenbaum at the Massachusetts Institute of Technology’s Lifelong Kindergarten Group while they were PhD students at MIT’s Media Lab. The project—billed as “a 21st century invention kit for everyone”—was originally supported through the crowd-funding website Kickstarter. The accompanying video offers a window into the myriad possible applications of this design toolbox of microcontroller, alligator clips, USB cables, and connector wires. Based in part on Arduino technology—also featured in this exhibition—the Makey Makey allows designers of all backgrounds and levels of expertise to connect the Internet to objects that conduct electricity. Bananas can function as piano keys, paint as a game console, or a cat as a camera auto-shutter.
Gallery label from This Is for Everyone: Design Experiments
for the Common Good, February 14, 2015–January 31, 2016.