Eduardo Cruz writes on the Arcade Hacker blog about security in the Sega System 16 gaming console.

Sega’s System 16 was a new arcade platform introduced in 1986 as a successor to the earlier 8 bit Z80 designs Sega System 1 and System 2. The new system brought in many system upgrades including 16 bit Motorola 68000 CPUs and pioneering security.

Above all, System 16 was one of Sega’s most successful games platform, seeing the release of countless epic games that form part of our collective childhood memories. Among my favorites titles are Shinobi, Golden Axe, Outrun, or Michael Jackson’s Moonwalker to name a few, I bet you have yours too.

The platform got subsequent updates and revisions introducing improvements to base specs and integration of chips. The initial System 16A was released in 1986 followed soon by the more common System 16B in 1987, a later revision known as System 18 was introduced in 1989.

The platform had some beefy specs for the time – the System 16A: 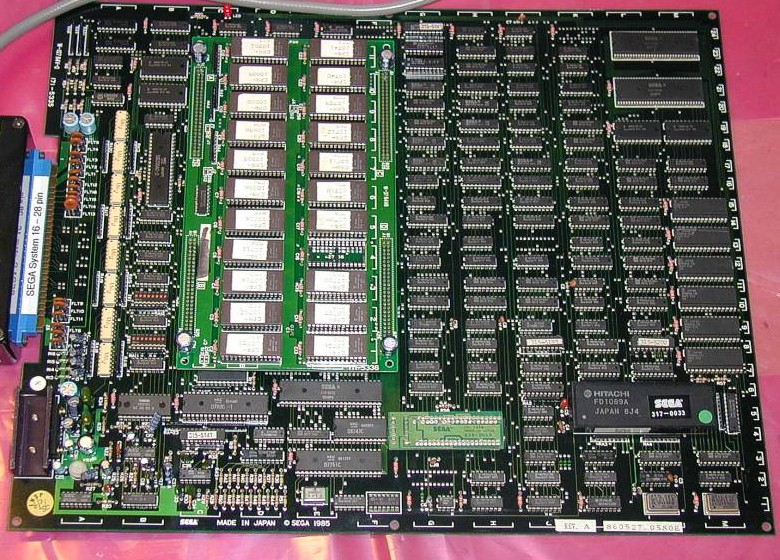 With the introduction of System 16, selected games replaced the main system 68000 CPU with secretive Hitachi branded device modules, these modules were Hitachi FD1089 revisions A and B, and a more commonly found Hitachi FD1094.

Most modules feature a sticker with a seven-digit code unique per game title and region. For arcade operators or collectors trying to replace these modules with a regular 68000 CPU or a different Hitachi module, this would result in a non-working game. A battery inside also plays a fatal role, losing its power renders the module unusable.

In combination with encrypted roms the modules provided Sega with a way to control piracy and stop unauthorized board conversions (when a game base system is reused for a different game).

See the article for more information.