Via the New York Times, new research now makes the case that the same incident that helped bring an end to the reign of the dinosaurs also acidified the planet’s oceans, disrupted the food chain that sustained life underwater and resulted in a mass extinction.

A study, published Monday in Proceedings of the National Academy of Sciences, aims to shore up the hypothesis that the Chicxulub event destruction of marine life — the result of sulfur-rich rocks depositing acid rain into the oceans — was just as severe as the fire and fury it brought to land.

“It’s flash acidification, and it transformed ecosystems for millions of years,” said Noah Planavsky, a biogeochemist at Yale and one of the study’s authors. “We were shocked that we actually found this.”

The impact of the Chicxulub asteroid — so named for the crater it carved out around the Gulf of Mexico — sent columns of rock into Earth’s atmosphere, incinerated the planet’s forests and drove tsunamis far across the oceans. But the connection between the crash and the marine extinction has been less solid.

Dr. Henehan and his team measured the boron in Foram shells collected in the Geulhemmerberg caves in the Netherlands. He found that the relative proportions of two isotopes of the element changed abruptly right at the time of the impact. In shells like these, Dr. Planavsky explained, proportions of the boron isotopes shift when the acidity of the oceans rises. And because this ancient shift happened in the first 100 to 1,000 years after the impact, it means the oceans became acidic practically overnight.

The flash acidification would have devastated organisms that formed the foundations of ecosystems, leading to problems for other creatures like the ammonites that lived higher up the food chain.

Read more in the article and the research paper. 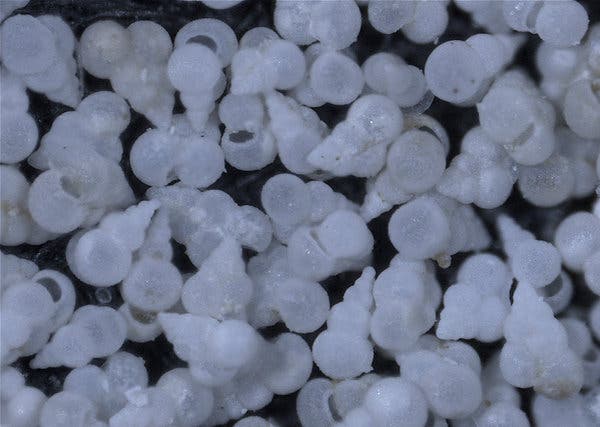