TEAM 6502 tells the story of the people behind the microchip that launched the personal computing revolution: the MOS 6502 @team6502

TEAM 6502 tells the story of the people behind the microchip that launched the personal computing revolution: the MOS 6502 (video) –

One of the most influential microprocessors ever designed, the MOS 6502 is credited with ushering in the most rapid democratization of technology in human history: the personal computing revolution.

When it was introduced in 1975 by MOS Technology of Valley Forge, Pennsylvania, the 8-bit microprocessor sold for a fraction of the cost of other microprocessors, causing rapid decreases across the industry. Featured in such seminal products as the Apple I and II, the Commodore PET and the BBC Micro, as well as Atari and Nintendo game consoles, the 6502 microprocessor has been the brains inside toys, office machines, and medical devices too numerous to mention. As one of the most widely used microprocessor architectures of all time, the CMOS related form of the 65XX developed by the Western Design Center is still in production today, with an estimated 6 billion units so far produced.

While the story of Chuck Peddle, the visionary who conceived of the 6502, and that of design team member and founder of the Western Design Center, Bill Mensch, are widely recognized and recorded, the stories of the other MOS Technology engineers and employees who also worked on the 6502 and their contributions are not. Team6502.org seeks to change that. 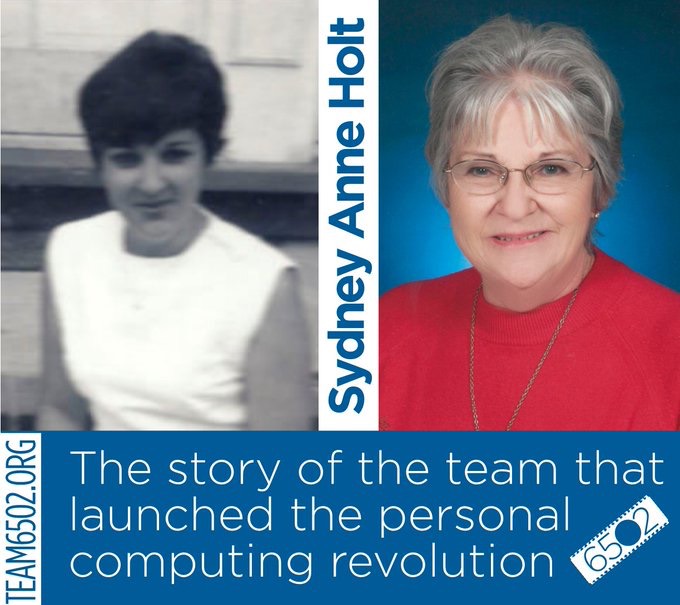 “No, only men.”- what 6502 Layout Designer, Sydney Anne Holt, was told when she declared an engineering major. Undeterred, she pursued a career in tech, including work on the chip that launched the personal computing revolution …

Sydney Anne Holt
Layout Designer
Sydney Ann Holt worked as a layout designer of the 6502 microprocessor. The following Q & A recounts her time and efforts at MOS Technology working on the 6502. Sydney was the only woman who worked in a design capacity on the 6502, and, in fact, was often the only woman doing so at subsequent companies throughout the 1980s as well. The following Q and A recounts her experiences working on the 6502 at MOS Technology and elsewhere.

Comments Off on TEAM 6502 tells the story of the people behind the microchip that launched the personal computing revolution: the MOS 6502 @team6502