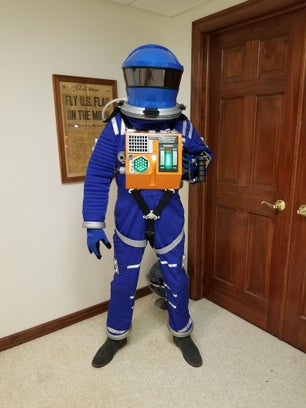 Just because Halloween 2019 has come and gone, doesn’t mean you can’t start working on your outfit for next year. This really cool project from badjer1 found on instructables is definitely worth checking out.

The title for this project is entirely descriptive of the process it took to create my version of a replica costume of the space suit from the Science Fiction novel by Arthur C. Clarke that was later made into the iconic 1968 film “2001 – A Space Odyssey.” I had just gotten into 3D printing about 4 months before starting this project and I wanted a challenge to build my skills. This certainly was it! I started this just after New Years 2019 and did a little work each weekend, chipping away at learning the CAD software (SketchUp), printing very large duration prints, and the sewing – much of it by trial and error! Hundreds of hours later I have what you see here. I did a lot of research online about the movie and the original movie props were pretty much destroyed by Kubrick. Very few props survived as he never intended there to be a sequel nor did he want profiteering off the props, many were ordered to be destroyed.

Comments Off on 2001: a Space Suit Odyssey