Living Computers: Museum + Labs posts about work to restore a DEC PDP-7 and have it run the first version of the UNIX operating system.

I recently sat down with Fred Yearian, a former Boeing engineer, and Jeff Kaylin, an engineer at Living Computers, to talk about their restoration work on Yerian’s PDP-7 at Living Computers: Museum + Labs. The PDP-7 (short for ‘Programmed Data Processor’) was introduced by The Digital Equipment Corporation (DEC) in 1964.

To find a PDP-7—particularly one that is operational—is exceptionally rare. To find one unknown to people is remarkable:

LCM+L’s PDP-7 was originally installed at the University of Oregon’s nuclear physics department. After Professor Harlan Lefevre accepted delivery of the system, his lab spent the next three years writing the necessary software required to carry out their research. Once complete, the system proved remarkably reliable: over the next four decades, it logged more than 60,000 hours of use and enabled 23 graduate students to earn their PhDs.

Up until the discovery of Yearian’s machine, LCM+L’s PDP-7 was believed to be the only operational PDP-7 left in the world. Chuckling to himself, Yearian recalls hearing this history presented during his first visit to LCM+L.

“I walked in the computer museum, and someone said ‘Oh, this is the only [PDP-7] that’s still working’.

And I said, ‘Well actually, I got one in my basement!’”

On November 7th, 2018, after over a year of correspondence following Yearian’s initial visit, a handful of Living Computers engineers … arrived at Yearian’s house to extract the PDP-7 from his work room and load it onto a truck bound for the museum.

From there, the team began working to load the UNIX Version 0 operating system onto the machine. This goal was an homage to the fact that Ken Thompson wrote UNIX Version 0 on an old PDP-7 at Bell Labs in 1969. UNIX also turned 50 this year, which made the restoration project all the more timely.

After countless hours of work, the team booted UNIX v0 on Yearian’s PDP-7 on Monday October 28th, 2019 for the first time. The engineers logged in as user ‘dmr’ as a tribute to Dennis M. Ritchie, who created UNIX with Ken Thompson in 1969. 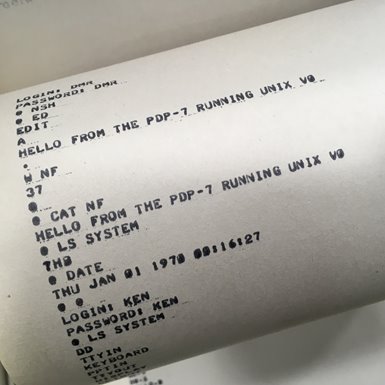