The Take Flight with Feather Contest is running from now to December 31st – see all the details in the kickoff post!

We’re going to highlight entries posted on Hackaday.io two at a time. Here are today’s entries:

The MGC3030 is an integrated capacitive gesture sensor that could be used in a lot of projects, but unfortunately it has pretty strict requirements for how the capacitive surface needs to look like. This is an attempt at providing a ready solution, the sensor with the minimal viable surface, all as a single FeatherWing suitable for use with Adafruit’s Feather boards.

Because of the requirements for at least four layers that are spaced pretty far apart, this is actually a sandwich of two PCBs, connected with pin headers. 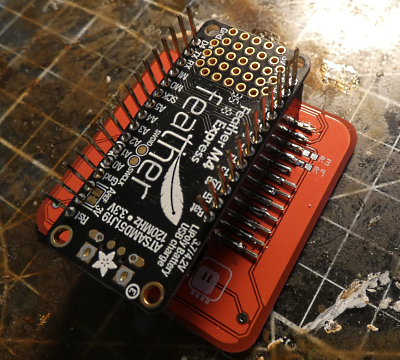 This is the successor of the #Tote robot, and its small family (#Tote Zero, #Tote HaD, #D1 Mini Tote). Tote itself was focused mostly on affordability, ease of assembly and extensibility — and I think that it achieved those goals relatively well. However, it turns out that physically building the robot and programming the first gait is just the tip of the iceberg. We need something a little more powerful than a simple Arduino, and something much easier to program and test.

The SpiderWing builds on top of Tote, but focuses more on the ease of programming and reliability. It uses slightly more expensive parts (Adafruit Feather boards, SG92R servos) to be more reliable and easier to reproduce exactly (whereas every Tote is slightly different from all the others). It will also use advanced sensors, such as the time-of-flight distance sensors or the IMU sensors with built-in fusion algorithms, in order to get better and more consistent results. 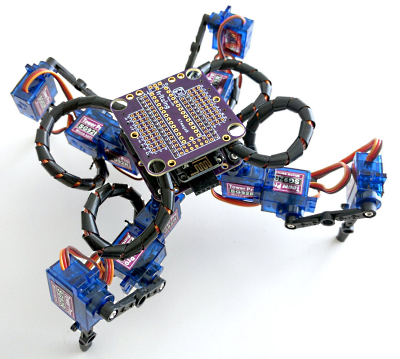 See a video of the SpiderWing below. Want to learn more about Feather? See the Awesome Feather list for details.