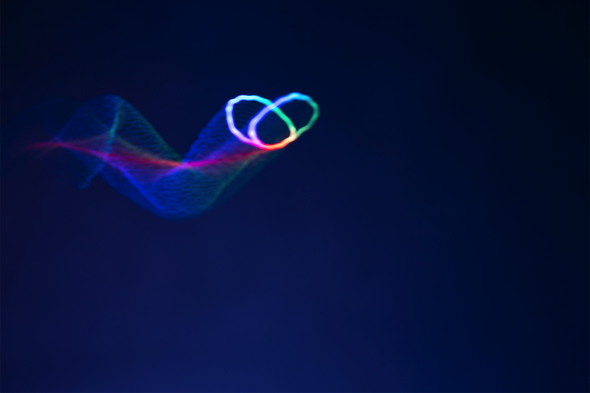 Neat developments in Acoustic Levitation from Scientific American. Sound waves move particles, which are then illuminated with LEDs. The effect is similar to a hologram but creates a fully 3D image and requires no screen.

As the bead flies around in programmed patterns, the researchers project changing colors onto it. “We illuminate that levitated particle using RGB LEDs—red, green, blue—so we can control the color of the scattering light,” Hirayama says. Thanks to its high speed—the particle can zip vertically at almost nine meters per second and horizontally at nearly four—the glowing dot fools the human eye into perceiving a continuous image. This phenomenon is known as persistence of vision. The same principle enables a visual trick often seen on the Fourth of July, when the glowing head of a sparkler appears to trace golden outlines as one moves it through the night air. The new volumetric-display technique was reported in Nature on Wednesday.