Today we celebrate John Bennett Herrington, is a retired United States Naval Aviator and former NASA astronaut. In 2002, Herrington is the first enrolled member of a Native American tribe to fly in space. 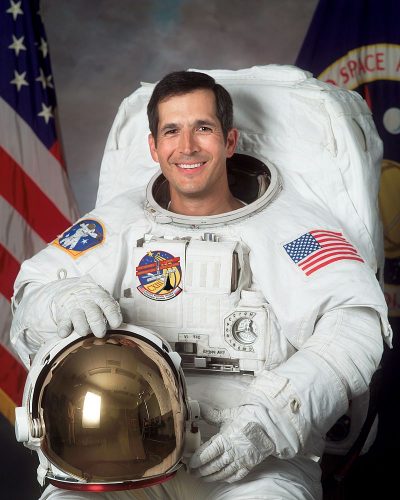 When astronaut John Herrington made his voyage to space aboard Space Shuttle Endeavour’s STS-113 mission, he became the first Native American in space. An enrolled member of the Chickasaw Nation, Herrington carried its flag on his 13-day trip to space, as well as several personal items with him. Among those items was this traditional flute.

Born in Wetumka, Oklahoma, into the Chickasaw Nation, Herrington built his career on service. He received his commission from Aviation Officer Candidate School in March 1984 and was designated a Naval Aviator in March 1985. He was selected as an astronaut candidate in 1996, after earning a master of science degree in aeronautical engineering in June 1995.

In July 2004, Herrington served as the commander of the NEEMO 6 mission, an analog mission that served as a field test in locations that have physical similarities to the extreme space environments. He and his crew lived and worked underwater for 10 days. Herrington retired from the Navy and NASA in July 2005.