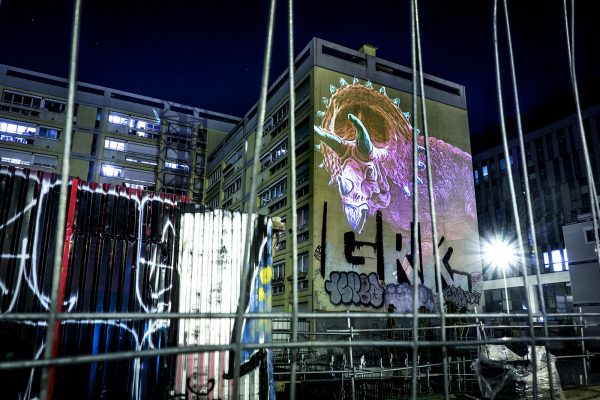 A T-Rex is inhabiting the streets of Paris. Artist Julien Nonnon has given life to extinct creatures in his latest work, “Prehistoric Safari,” by using video-mapping technology to project images of the dinosaurs in the Jardin d’Acclimatation, a long-established Parisian amusement park. Nonnon says the digital art form, which is at the intersection of photography, video, architecture and scenography, has allowed him to produce 17 3D-projections of species that occupied the Cretaceous period. A T-Rex flaunting its yellow eyes and a triceratops brandishing green horns appear at nightfall on building sides in holographic form.

The artist tells Colossal that this project is centered on pop culture and “was inspired by the adventure books of Sir Arthur Conan Doyle, Jules Verne and Michael Crichton, as well as Steven Spielberg’s movies.” In addition to the 3D-projections, Nonnon also directed a mini film titled “Dino Escape,” which depicts a dinosaur invasion of Paris’s streets and includes an interactive quest for audience members to retrieve a T-Rex egg and bring it to present day.