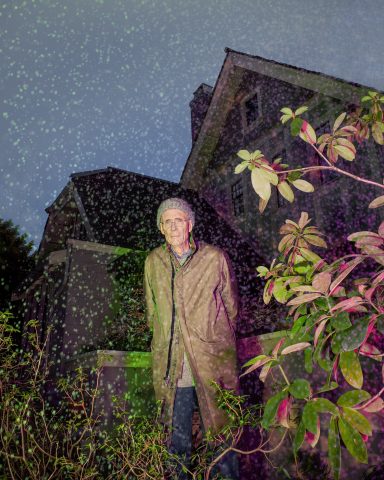 via The New Yorker

Gibson doesn’t have a name for his method; he knows only that it isn’t about prediction. It proceeds, instead, from a deep engagement with the present. When Gibson was starting to write, in the late nineteen-seventies, he watched kids playing games in video arcades and noticed how they ducked and twisted, as though they were on the other side of the screen. The Sony Walkman had just been introduced, so he bought one; he lived in Vancouver, and when he explored the city at night, listening to Joy Division, he felt as though the music were being transmitted directly into his brain, where it could merge with his perceptions of skyscrapers and slums. His wife, Deborah, was a graduate student in linguistics who taught E.S.L. He listened to her young Japanese students talk about Vancouver as though it were a backwater; Tokyo must really be something, he thought. He remembered a weeping ambulance driver in a bar, saying, “She flatlined.” On a legal pad, Gibson tried inventing words to describe the space behind the screen; he crossed out “infospace” and “dataspace” before coming up with “cyberspace.” He didn’t know what it might be, but it sounded cool, like something a person might explore even though it was dangerous.

Gibson first used the word “cyberspace” in 1981, in a short story called “Burning Chrome.” He worked out the idea more fully in his first novel, “Neuromancer,” published in 1984, when he was thirty-six. Set in the mid-twenty-first century, “Neuromancer” follows a heist that unfolds partly in physical space and partly in “the matrix”—an online realm. “The matrix has its roots in primitive arcade games,” the novel explains, “in early graphics programs and military experimentation with cranial jacks.” By “jacking in” to the matrix, a “console cowboy” can use his “deck” to enter a new world.

Comments Off on Neuromancer Writer William Gibson Gets In Depth Profile