How Industrial Light and Magic Engineered the Lightabsers of Star Wars 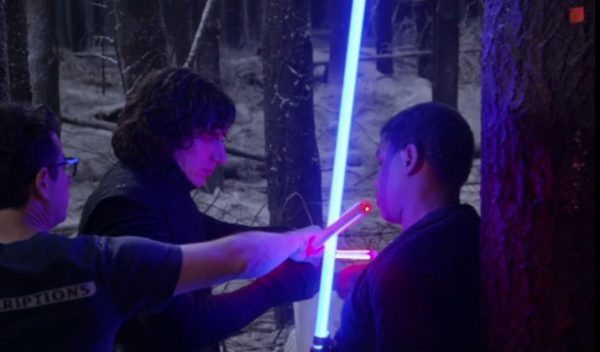 For the first film (Star Wars, or later, Star Wars: A New Hope), the lightsabers were largely a real-world effect. As detailed in a 2004 featurette titled “The Birth of the Lightsaber,” the early sabers consisted of a rotating pole that had reflective tape applied to it, creating the “glowing” effect. Then, using rotoscoping technology, the overlays for the saber colors were added to the film, creating the first lightsaber effect. But as actor Mark Hamill (Luke Skywalker) explains in the featurette, if the blades were held at the wrong angle, the lights wouldn’t reflect properly, leaving a far less dramatic-looking prop sword. Creator George Lucas would go on to improve the effect with proper CGI blades in future remasters of the film, but limitations of this technique are still apparently in older cuts, particularly in Luke’s training scene on the Millennium Falcon and Obi-Wan and Darth Vader’s duel on the Death Star.

Those techniques from Empire and Return of the Jedi would be refined in the CGI-powered frenzy that took over the prequel films. The faster, more kinetic swordplay meant that the battles were largely shot with actual prop swords, with computer-generated blades added in post to convert the brightly colored plastic into the iconic beams of light. But the largely computer-generated nature of the prequels hindered the ability to do accurate saber lighting, given that nearly all of the major lightsaber battles in the prequels took place on green screen sets. It’s much harder to have realistic lighting effects when the only real things being captured on camera are the two actors.