The Far Side Officially Online, New Comics to Come 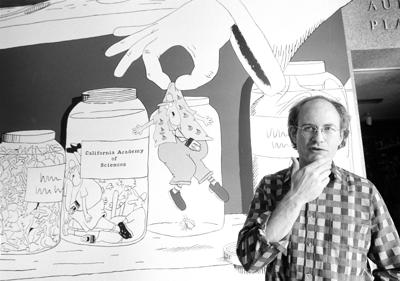 Iconic comic strip The Far Side launched its official website today, which debuted with a selection of classic cartoons, doodles from creator Gary Larson’s sketchbooks, and a letter from the cartoonist himself…. Larson’s letter explains his understandable hesitation to embrace the internet, mainly over issues of copyright infringement. “[Y]ears ago, when I slowly started realizing I had a second publisher and distributor of my work, known as Anyone With a Scanner & Associates, I did find it unsettling enough to write an open letter to ‘whom it may concern,’ explaining — best as I could — why I preferred that the people doing this would kindly refrain,” Larson writes. Most of these websites, run by Far Side fans, complied with requests to take the comics down. But now the cartoonist says trying to take control over his comics has been “an uphill slog,” and he hopes that giving the comics an official digital home will “help temper the impulses of the infringement-inclined.”

High-tech improvements in security and graphics have also been another push for Larson to join the online world. Though he still has some reservations about the internet — “If they wanted to, I’m sure the Russians could get inside this thing and start messing with my captions. (I know they’re thinking about it!)” — Larson told The New York Times that he recently got a tablet, and that he’s been having fun drawing again.

Filed under: comics —
Tags: Gary Larson, The Far Side — by Zay