Dark Horse Discord – How a gaming chat platform is secretly connecting the internet, and defining the future of work @discordapp

It is no secret that video games have seemed to consistently push the envelope of emerging technology. Gaming has been responsible for the beginning of 3d graphics, microtransactions, digital status, and the tipping point for “internet friends” being considered “real friends”. Many of our first internet communities were games, and it’s the bleeding edge of software eating culture.

So, enter stage left: Discord, which is in my opinion the darkest of horses for any kind of platform, and is generally slept upon by most writ large but has an interesting shot to becoming something bigger or at least a design pattern for something more.

Adafruit uses Discord and has 16,000 members as of last week. It’s been a great home for the community to grow together. When we started using Discord, we were calling it a publishing tool, a community hub that happened to also be used for gaming. 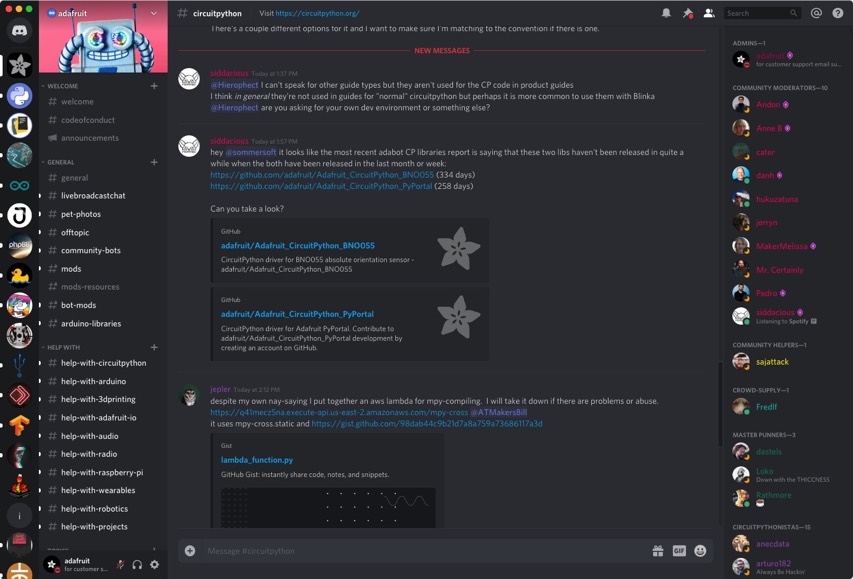 At this time, it looks like Discord has, overall, about 250m+ users or more.

One of the things that was helpful with Discord is it started out as platform that is _not_ associated with work. For community building and efforts, that seemed to help, as nights and weekends are a time to tune out of Slack. A lot of us use Slack all day for work, having a place that is Slack-like in some ways, but is not Slack for getting together is a nice break.

Slack, if interested, could do a parallel offering that is free or low-cost for open-source communities if they want to keep folks in Slack and have a path to paid tiers. Moderation tools would need to be added which is what is missing from Slack now. That said, making Slack like Discord for communities sounds like a giant distraction from “Slack for Business” vibes and Slack competing with Microsoft Teams. With Microsoft owning GitHub, maybe there’s a Microsoft Teams-like thing that is like Gitter for communities. Gitter is used by many open-source efforts.

“What about IRC?” … IRC does not have a mobile offering with notifications, or an easy web interface, does not have consistent apps across platforms, ease of use, easy moderation tools, etc. Both Slack and Discord can be installed and used immediately. IRC’s barrier is too high for most folks. Gitter has an IRC bridge and there are ways to get IRC in/out of Slack and Discord for the motivated.

As far as our electronics / open-source communities, here are the Discords, Slacks, and other places we tune in to. There is not a way to export the list of servers we are on which has all the invite links, so search for the name of the server and Discord, etc. to find an invite/link:

On Slack:
MicroPython
The Prepared
Zephyr

Other:
hackaday.io has their own chat server/service. hackaday had one of the first ones, before Discord came out, from what I recall.

Missing from the list(s) are Sparkfun and SeeedStudio. By that I mean – those are two I’d expect to have some type of community server on one of these services as well (Arduino does, Adafruit does, Pimoroni does, EMSL does, etc). Also, it seems to me like Reddit will eventually do some type of real time chat service / app, and Twitch (Amazon) might just try to purchase Discord, just guesses.

One request I saw in the MicroPython Slack was for Discord to have threaded chats, our Discord server is really active so you need to scroll. In Slack, threads are/can be made for conversations.

Related:
Why Every Influencer Has a Discord.

Comments Off on Dark Horse Discord – How a gaming chat platform is secretly connecting the internet, and defining the future of work @discordapp