The Moon Miranda, Where Cliffs Tower Miles Above a Bizarre Surface 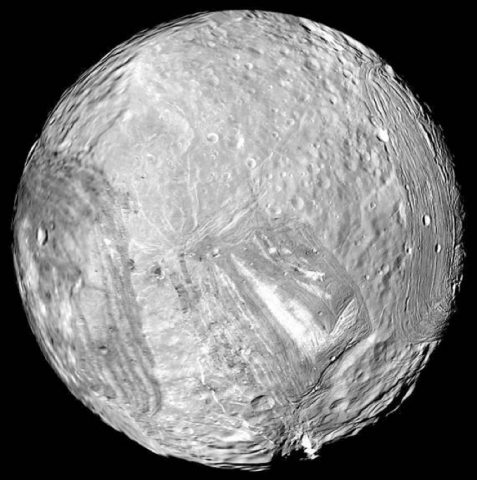 On 4 January 1986, NASA’s Voyager 2 spacecraft snapped spectacular pictures of Uranus’ moon Miranda, one of the strangest bodies in the solar system. Three lightly cratered areas of ridges and valleys, known as coronae, are separated from presumably older, heavily cratered regions, giving the surface the appearance of “mismatched patches on a moth-eaten cloth,” according to a description on NASA’s Solar System Exploration website. Giant fault canyons plunge 12 times deeper than the Grand Canyon with sheer cliffs that almost defy imagination. Thanks to the moon’s low gravity, an astronaut stepping off the edge of the highest cliff would have a full 10 minutes to reconsider the wisdom of that final step before hitting the ground below.

Comments Off on The Moon Miranda, Where Cliffs Tower Miles Above a Bizarre Surface