Here’s an interview with Arduino’s CEO Fabio Violante “Open-source HW in the Modern Era” by Maurizio di Paolo Emilio at EE Times Europe. this interview / article is really interesting (added some follow up questions/comments I have, if anyone knows a good contact at Arduino for questions please let me know) …

“We are going to make some important announcements in the forthcoming quarters. Of course, Arduino is a popular platform, and we continuously receive interest from different companies and financial investors.

It’s unclear at this time, or at least not public, if there are investors in Arduino (ARM says they invested, see below). There is some relationship with ARM for sure (see article: The Mystery Of Arduino & ARM). Hackaday has a post about this “Who owns Arduino?” with a quote from Arduino:

“Hi arm did not buy nor invest in arduino. The founders + Fabio Violante still own the company. As I wrote in the blog post we are still independent, open source and cross platform.” – Massimo Banzi – Arduino.

There seems to be some conflicting information about this as Ian Ferguson who was at ARM, as the VP Ecosystem Development, IoT Services Group, says that ARM invested in Arduino, and was a Non Executive Director at Arduino. Ian says “Worked with the fantastic Arduino management team on creating the business plan further to Arm’s investment in the company in mid 2017.” 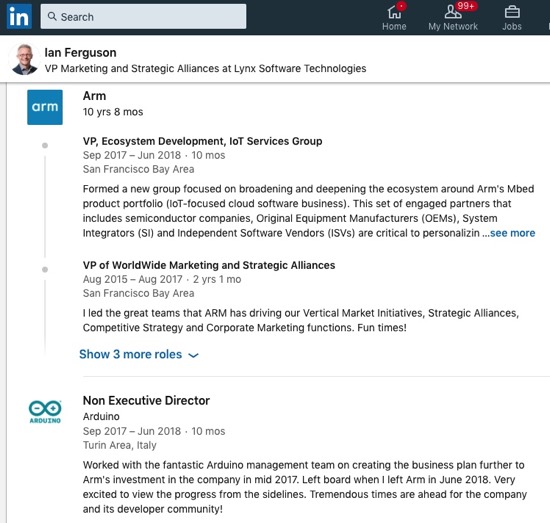 Additionally, Manish Narula – Vice President, Corporate Development and Strategy (M&A and Venture Investments) at ARM was on the Arduino board. Ian and Manish were listed as board members on the Swiss biz site as well.

Last up, Fabio comments on open-source hardware in 20 years …

Could you imagine open-source hardware in 20 years?
“I think open source is a great way to foster innovation, freedom and creativity. As far as the business models are concerned, for sure there will be some adjustments in the future, because there is a bit of imbalance between people that, like us, spend a lot of time and energy designing the core technologies, writing tons of lines of code, firmware and libraries; and people that just take our designs and code, clone it as it is and then release a cheaper product on the market which, in many cases, even violates our trademarks (e.g., you cannot call a clone product Arduino Uno R3 even though you can build a legal clone identical to our UNO R3), our USB identifiers etc. In most cases, while we have a lot of collaboration on the software side we see very limited contribution back on the open-source hardware designs. At Arduino, we try to contribute a lot to existing projects rather than predating other open-source projects. In the near future, we will be partnering with a number of other organizations to support the development of the most complex projects and will provide more visibility to the ones we deem important for the community. As a final remark, I do believe that very likely combinations of SaaS and hardware revenue models will help sustain the open-source hardware companies.

This seems to be the direction Arduino is going, for Arduino CREATE, you need to pay a fee ($6.99 USD) to Arduino to use a non-Arduino board (ESP8266) and the boards that are supported for free are only allowed to be from Arduino. So it appears Arduino is moving to SaaS as their business model.

Why is this interesting to us? Specifically about ARM and Arduino? Arduino seems to be using mbed (ARM’s middleware) to add support for new chip sets, if so that would be good to know for the developers and community out there as far as what direction things are going.