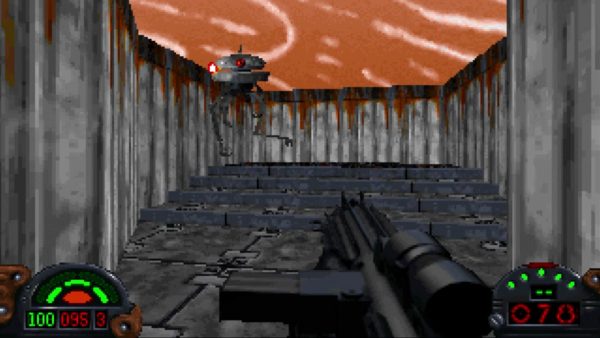 Once upon a time DOOM was that MS-DOS secret that appeared on the PC of the guy down the hall in your frosh dorm. And then, a few years later, LucasArts took smooshed together DOOM and Star Wars into Dark Forces. And many night and weekends were lost. An absolute classic, now 25 years old.

Dark Forces evoked a sense of place more than any shooter I’d played at the time. It let me walk around inside the Star Wars universe in a way we’d never been able to before, and get into the kind of frenetic blaster duels we’d seen aboard the Death Star in the original movie. It was crudely done, but the iconography was so powerful that the illusions came together. If you walked into a giant room and there was a rectangular slab running along one wall with a blur or pixelated strip-lighting around it, and little alcoves cut into the wall of the next room, you knew you were in a cantina. If you were in a sewer and one of those eye-stalk monsters popped out, it was a Star Wars Sewer. And if you saw a bunch of little white-armored sprites standing stock-still behind an Imperial officer, like those cut-outs of Rebel troops at the end of A New Hope, you could pretend it was a squad of Imperial troops awaiting orders from their CO, and not just a bunch of simple enemies waiting for you enter their detection radius so they could start going through the motions of trying to kill you.

Comments Off on 25 Years Ago: ‘Star Wars: Dark Forces’ Is a Forgotten Gem #SciFiSunday