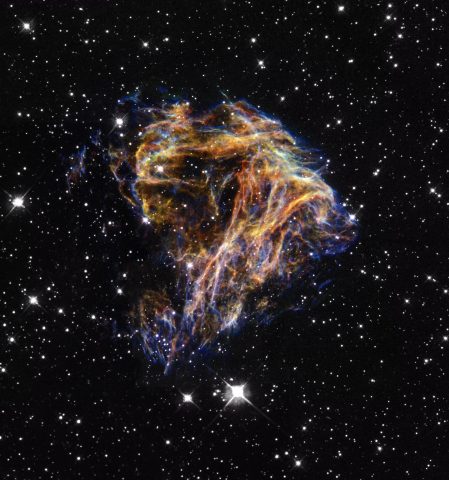 Astronomers call them supernova remnants or nebulas, but we might as well call them the ghosts of stars. When a massive star runs out of fuel, it might collapse inward or explode outward. Either way, all the stellar material in the star will be expelled at velocities as hight as 10% of the speed of light, creating a shockwave that heats those remnants up to millions of K. As the shock wave slows down, the ejecta left behind settles into an enormous, beautiful, space object.

DEM L 190 is just such an object: supernova remnant, nebula, star ghost. Here are some amazing images of a DEM L 190 in the Large Magellanic Cloud, via Astronomy Now.

Thousands of years ago, a flash of light reached Earth, a beacon heralding the death throes of a massive star. Located in the Large Magellanic Cloud, a companion galaxy to the Milky Way, the star left behind a huge cloud of chaotic, seemingly wispy gas, seen here in an image captured by the Hubble Space Telescope, that was blown away before and just after the sun exploded. The gas will provide the raw material for another generation of stars, mirroring the process that led to the Sun’s formation and the planets in Earth’s solar system. The doomed star’s core, meanwhile, its nuclear fuel exhausted, succumbed to gravity and collapsed on itself, likely forming a compact, spinning pulsar. A pulsar does, in fact, lurk near the supernova remnant known as DEM L 190, completing one turn on its axis every eight seconds. Boasting a magnetic field thousands of times stronger than Earth’s, the pulsar is classified as a magnetar and may well be the remnant core of the star that exploded.