1,000 True Fans: how creators can sustain themselves in the digital age #makerbusiness 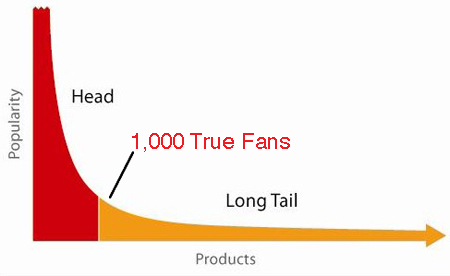 We recently talked about Craig Mod’s paid membership program “Explorers Club”, and in this post discussed funding and support models where the principle of “1000 True Fans” came up. This idea, from Kevin Kelly, is worth looking at at length. It’s not revolutionary per se, but it is an invaluable framing mechanism for the viability of a business or content creator in the digital age.

The fundamental formula for “1000 True Fans” is simple. At the most basic level, how much money does each person involved in a business/program need to sustain their work (and life). If you are a sole creator and want $50,000 a year, divide that number by 1,000. That’s $50, and it’s how much you need each of your 1,000 fans to give you to maintain your work/business. The challenge is then to find those fans and then deliver them products that they will value at that rate.

Kelly’s essay was published in 2008, and 12 years later, its only gotten easier to reach would-be customers, both in terms of product delivery and funding options. The internet gives creators access to billions of potential customers. Services like Pateron and Kickstarter make funding automatic and immediate. Indeed things have become so frictionless Li Jin, a partner at investment firm a16z, recently wrote a post called “1,000 True Fans? Try 100“.

The 1,000 number that Kelly lands on, and Jin modifies, is a little misleading. I’m sure both of them would acknowledge this, but if you can find one person to give you $100,000 a year, you have accomplished your task.  The point is not that you need democratized content, it’s that you have access to more people than ever before, and if they value your work, they can pay you for it.

An important thing to note about all this is: this is not new. Patronage and support has been happening for thousands of years. A local carpenter makes money like this. Renaissance painters (and some painters today) make money like this. The aberrations are the big companies that appeared during industrialization, and creators that managed to take advantage of wide distribution networks. The special thing about today is that, in some areas, the distribution potential is now equally wide for individual creators! Kelly highlights this concept well:

If you lived in any of the 2 million small towns on Earth you might be the only one in your town to crave death metal music, or get turned on by whispering, or want a left-handed fishing reel. Before the web you’d never be able to satisfy that desire. You’d be alone in your fascination. But now satisfaction is only one click away. Whatever your interests as a creator are, your 1,000 true fans are one click from you. As far as I can tell there is nothing — no product, no idea, no desire — without a fan base on the internet. Every thing made, or thought of, can interest at least one person in a million — it’s a low bar. Yet if even only one out of million people were interested, that’s potentially 7,000 people on the planet. That means that any 1-in-a-million appeal can find 1,000 true fans.

The large distributors also have disadvantages. If you have 1000 fans, or 100 fans, you can actually know what they want. You can actually KNOW them. Big companies are spending tons of money to, at best, accurately profile and target their customers, but that only does so much work.

…despite being in business for hundreds of years no New York book publisher knew the names of their core and dedicated readers. For previous creators these intermediates (and there was often more than one) meant you need much larger audiences to have a success. With the advent of ubiquitous peer-to-peer communication and payment systems — also known as the web today — everyone has access to excellent tools that allow anyone to sell directly to anyone else in the world. So a creator in Bend, Oregon can sell — and deliver — a song to someone in Katmandu, Nepal as easily as a New York record label (maybe even more easily). This new technology permits creators to maintain relationships, so that the customer can become a fan, and so that the creator keeps the total amount of payment, which reduces the number of fans needed.

As an individual creator, the strengths are also the challenges: you have to do everything yourself. There are services to help, but you need to find your value, find what works, and find your fans. There are a bunch of tips in these posts that are good to consider for anyone interested in this model and approach.

Comments Off on 1,000 True Fans: how creators can sustain themselves in the digital age #makerbusiness