VIa Women in History: 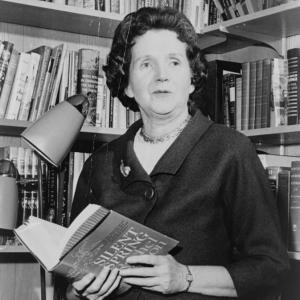 A marine biologist and nature writer, Rachel Carson catalyzed the global environmental movement with her 1962 book Silent Spring. Outlining the dangers of chemical pesticides, the book led to a nationwide ban on DDT and other pesticides and sparked the movement that ultimately led to the creation of the US Environmental Protection Agency (EPA).

“Silent Spring,” a landlubber, is no slouch of a book: it launched the environmental movement; provoked the passage of the Clean Air Act (1963), the Wilderness Act (1964), the National Environmental Policy Act (1969), the Clean Water Act and the Endangered Species Act (both 1972); and led to the establishment of the Environmental Protection Agency, in 1970. The number of books that have done as much good in the world can be counted on the arms of a starfish.