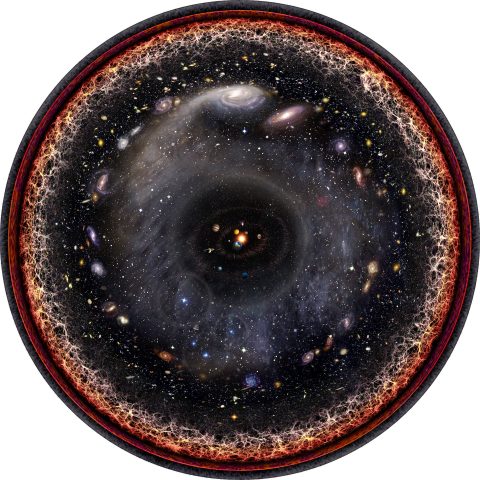 How amazing are we, we ridiculous humans, who enthusiastically attempt to imagine the entire universe. The very idea of something like infinity is both an invention and a discovery. Same with gravity, relativity, and all the speculations of what shape the universe actually is. Musician and artist Pablo Carlos Budassi has brought together dozens of satellite images and tried to create an representation of the entire known universe. More from COLOSSAL

Using scores of satellite images and photos snapped from NASA’s rovers, he painstakingly pieced together many of the prominent features of the universe as observed from our solar system in the form of a logarithmic map. Logarithms are useful for understanding large numbers or distances, so in Budassi’s map each consecutive ‘ring’ around the circle represents several orders of magnitude further than the one before it.

Budassi was aided by similar (though less visually stunning) logarithmic maps produced by astronomers at Princeton back in 2005. In this map, our sun and solar system are seen in the middle, followed by the Milky Way Galaxy, another ring of nearby galaxies like Andromeda, all the way out to cosmic radiation and plasma generated by the bing bang on the furthest outskirts of the image.