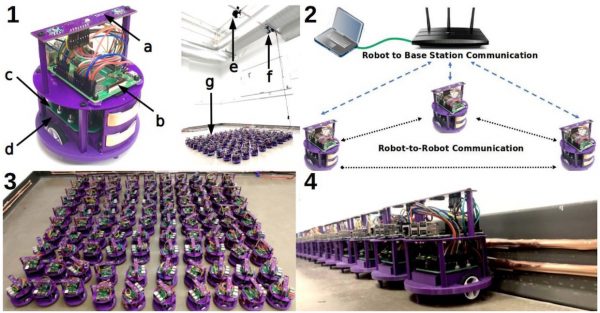 To solve these problems, the robots are all talking to each other as they move, not just to avoid colliding with its friends, but also to figure out where its friends are going and whether it might be worth swapping destinations. Since the robots are all the same, they don’t really care where exactly they end up, as long as all of the goal positions are filled up. And if one robot talks to another robot and they agree that a goal swap would result in both of them having to move less, they go ahead and swap. The algorithm makes sure that all goal positions are filled eventually, and also helps robots avoid running into each other through judicious use of a “wait” command.

What’s really novel about this approach is that despite the fully distributed nature of the algorithm, it’s also provably correct, and will result in the guaranteed formation of an entire shape without collisions or deadlocks. As far as the researchers know, it’s the first algorithm to do this. And it means that since it’s effective with no centralized control at all, you can think of “the swarm” as a sort of Borg-like collective entity of its own, which is pretty cool.