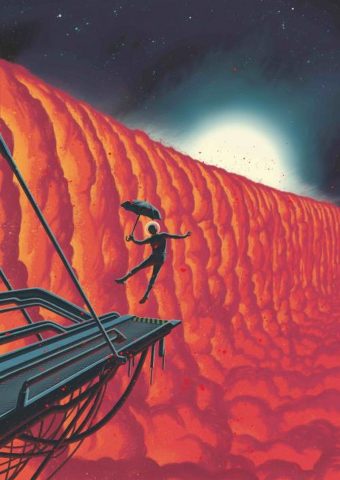 One of the greatest science fiction writers was a former intelligence officer who wrote under the excellent pseudonym Cordwainer Smith. Smith’s work was extraordinary, pushing the tropes of science fiction into a kind of weird poetry. His most famous short story, “Scanners Live in Vain,” is a kind of extended metaphor that uses interstellar travel, human-machine melding, and a mysterious “Great Pain of Space” to talk about emotional closeness and emotional distance. It’s an amazing story.

“The Iron Rain of WASP-76b” could be a Cordwainer Smith title. It’s also just a science fact. Here’s more from Universe Today:

Imagine a planet where it rained iron. Sounds impossible. But on one distant exoplanet, which is tidally locked to its star, the nightside has to contend with a ferrous downpour.

The planet is called WASP-76b and it’s about 390 light years away from us in the constellation Pisces. It was discovered in 2013, and it’s the only known planet orbiting the star WASP-76. It’s a huge planet, and the dayside temperature can reach 2,400 Celsius (4350 F) which is hot enough to not only melt iron, but to split molecules into atoms.