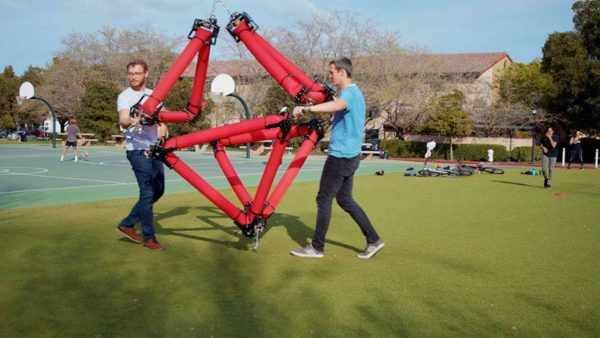 One big area of focus for robotics researchers is soft robots that are more appropriate for working directly with humans. Researchers from Stanford University have developed a new kind of soft robot that borrows features from traditional robotics while retaining the ability to move and change shape typically found in soft robots. The team says that a significant limitation of most soft robots that they require an attachment to an air compressor or have to be plugged into a wall keeping them from being able to move.

The team at Stanford says that they wondered what would happen if they kept the same amount of air in their soft robot at all times. After starting with that question, the researchers developed the human-scale soft robot that’s able to change its shape, allowing it to grab and handle objects as well as roll in controllable directions. The robot they developed is described as a cross between Baymax from the movie “Big Hero 6” mixed with Transformers.