William Gibson’s strange, highly-influential foray into the fine art world with “Agrippa: A Book of the Dead” #cyberpunk 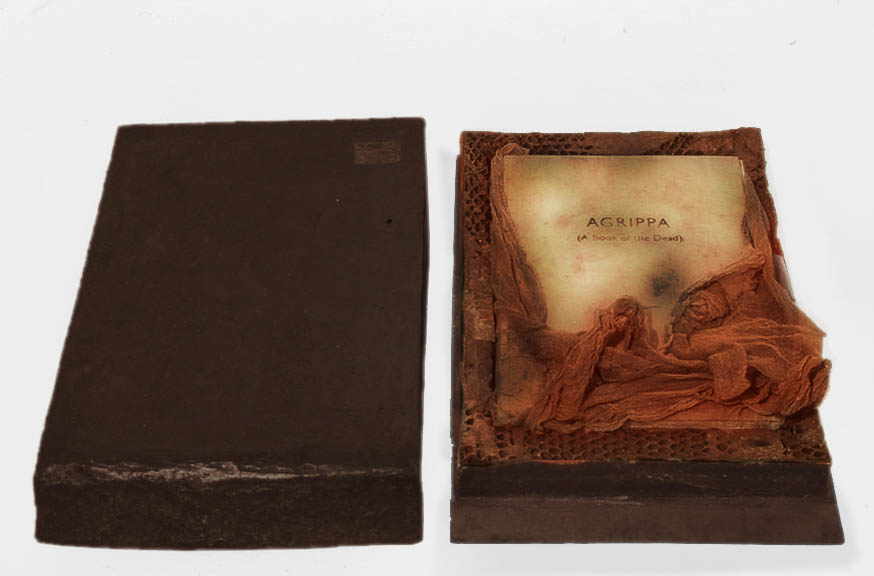 One of the hallmarks of late 80s/90s cyberpunk fiction was the freedom its authors gave themselves to paint outside the lines of the sci-fi genre, to draw on elements of experimental and modern high-brow lit, to monkey around with different styles and techniques, to cop an attitude as visceral and petulant as punk rock. It was called cyberPUNK for a reason. It’s also interested to note that many of the initial authors of the genre had other professional interests. William Gibson– whose interest in product and industrial design is readily apparent in his fiction–went on to do clothing design, Bruce Sterling has worked as a professor of media and design, Rudy Rucker is a mathematician, teacher, and artist, and John Shirley was a punk rocker and songwriter.

So, it maybe shouldn’t have come as the surprise that it did when, in 1992, William Gibson collaborated on a tortuously obtuse limited edition artist’s book. The piece, known as “Agrippa: A Book of the Dead,” was a collaboration with fine artist Dennis Ashbaugh and art book publisher Kevin Begos Jr. Here is the Wikipedia description of the piece.

The book was published in two limited editions—Deluxe and Small—by Kevin Begos Jr. Publishing, New York City. The deluxe edition came in a 16 by 21½-inch (41 cm × 55 cm) metal mesh case sheathed in Kevlar (a polymer used to make bulletproof vests) and designed to look like a buried relic. Inside is a book of 93 ragged and charred pages sewn by hand and bound in stained and singed linen by Karl Foulkes; the book gives the impression of having survived a fire; it was described by Peter Schwenger as “a black box recovered from some unspecified disaster.” The edition includes pages of DNA sequences set in double columns of 42 lines each like the Gutenberg Bible, and copperplate aquatint etchings by Ashbaugh editioned by Peter Pettingill on Fabriano Tiepolo paper. The monochromatic etchings depict stylized chromosomes, a hallmark of Ashbaugh’s work, accompanied by imagery of a pistol, camera or in some instances simple line drawings—all allusions to Gibson’s contribution.

The deluxe edition was set in Monotype Gill Sans at Golgonooza Letter Foundry, and printed on Rives heavyweight text by Begos and the Sun Hill Press. The final 60 pages of the book were then fused together, with a hollowed-out section cut into the center, containing the self-erasing diskette on which the text of Gibson’s poem was encrypted. The encryption was the work of a pseudonymous computer programmer, “BRASH,” assisted by Electronic Frontier Foundation founders John Perry Barlow and John Gilmore. The deluxe edition was originally priced at US$1500 (later $2000), and each copy is unique to some degree because of handmade or hand-finished elements.

The small edition was sold for $450; like the deluxe edition, it was set in Monotype Gill Sans, but in single columns. It was printed on Mohawk Superfine text by the Sun Hill Press, with the reproduction of the etchings printed on a Canon laser printer. The edition was then Smythe sewn at Spectrum Bindery and enclosed in a solander box.A bronze-boxed collectors’ copy was also released, and retailed at $7,500.

Gibson’s 300-line semi-autobiographical remembrance-of-things-past poem is housed in the center of work, stash-book style, with its contents programmed to disappear after a single viewing. After the first reading, the poem was automatically encrypted on the disk. Many hackers and “cypherpunks” attempted to crack the file and a little subculture of enthusiasts grew up around The Agrippa Files, a site set up at the University of California, Santa Barbara, to discuss the work and trade tools for cracking the “Agrippa Code.” Despite these efforts, that crack did not occur until 2012. Some of the printed portions of the book were also supposed to fade when exposed to light, but that part of the production was never realized. Early on, there were also plans for an LCD readout and a “circuit-board hologram”(?), but they were wishful design ideas. 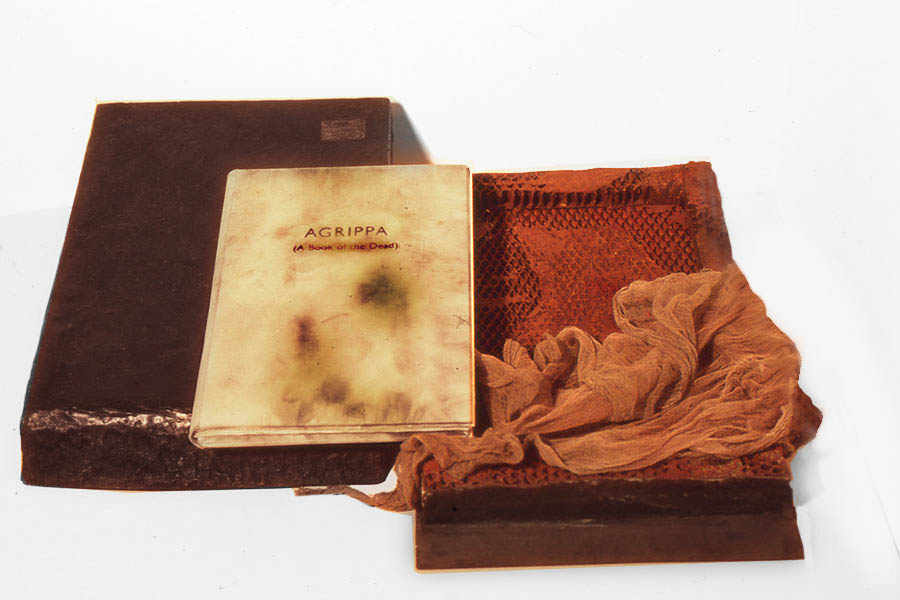 The theme of Agrippa, the poem, and the artist’s book concerns memory, childhood, family. Interestingly enough, memory is also an underlying theme in both Neuromancer and Blade Runner (and by extension, Do Androids Dream of Electric Sheep?, PK Dick’s book which served as source material for Blade Runner).

The complete Agrippa art piece also speaks to the saturation of technology into every corner of art, science, and culture, the impermanence of the digital, and the possible twilight of the book itself. 455 copies of Agrippa were produced. It is interesting to note that the title bears no relationship to Cornelius Agrippa, the 15th century occultist and polymath. Even though the dark and ominous rendering of the book, wrapped in what looks like grave cloth. feels ancient and grimoire-like, the name Agrippa actually refers to an old brand of Kodak photo albums. An early line from the poem reads: “A Kodak album of time-burned black construction paper.” The Agrippa artifact is rendered in exactly that spirit.

What follows is a 2009 emulation of what it would’ve been like to open the Agrippa poem from the disk, have it scroll by, and then watch the encryption program going to work and making it all disappear.

You can read the full, enduring text of Agrippa here. And you can see more images of the book on Dennis Ashbaugh’s website.

The only reason Gibson/cyberpunk fans were able to read Agrippa before the 2012 hack was because, at the “Transmission” event for the book and reading of the poem, held at the Americas Society, New York City, on December 9, 1992, someone surreptitiously recorded the reading and transcribed the poem from the VHS tape. 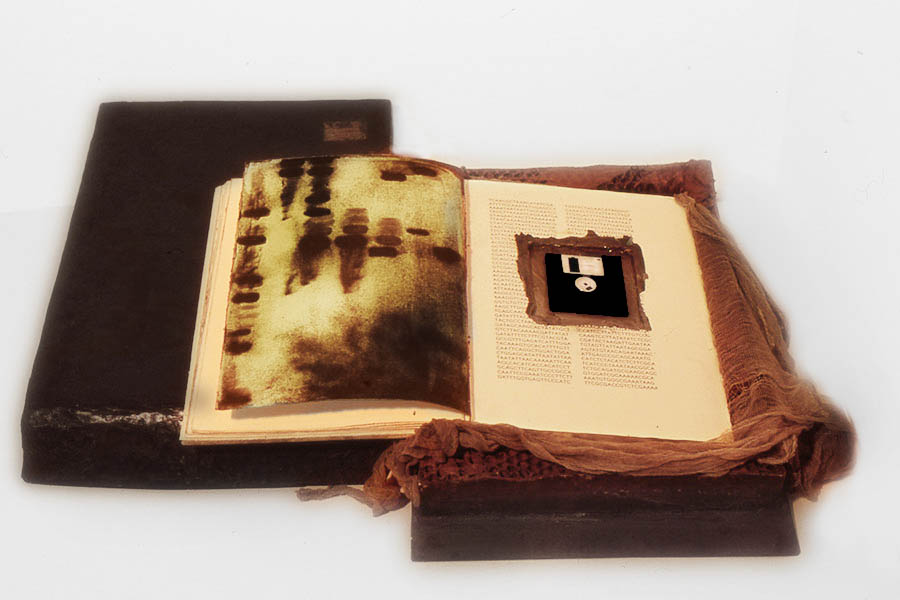 There is something particularly haunting and strange about the Agrippa project. It felt both ancient and modern, analog and digital, understandable and incoherent, extra-permanent (Kevlar, metal, thick archival paper) and digitally ephemeral. And at its heart was a extremely personal poem (that you were only supposed to see once) from a very private author; a nostalgic look back from a speculative futurist at the height of his powers. It is therefore not surprising that the work proved to be surprisingly influential and attracted a lot of attention (and confusion) at the time and continues to fascinate today. As I opined in an earlier post, sometimes the most enduring, impactful art comes from not knowing exactly what elements you are orchestrating or exactly why. Agrippa certainly seems like it doesn’t know what it wanted to be.

One aspect of the project that was surprisingly prescient was its central gimmick of a text that disappears after you read it. Anyone who lived through the first few decades of online life and wrote their hearts out there (remember BBSes? GeoCities? Friendster? MySpace? LiveJournal?) can relate to the fading memories of Agrippa. Those frontier towns of cyberspace, and all that was built there by enthusiastic and naive pioneers, have long ago turned to digital dust. Which raises the alarming question: What will become of what we are building in today’s digital realms? Is it all destined to suffer the same fate as Agrippa?

Comments Off on William Gibson’s strange, highly-influential foray into the fine art world with “Agrippa: A Book of the Dead” #cyberpunk