Today we celebrate pioneering landscape architect Ruth Shellhorn, who developed the “Southern California look” that incorporated nature into urban settings to create sustainable landscapes. She was also pivotal in the central landscaping elements of Disneyland. 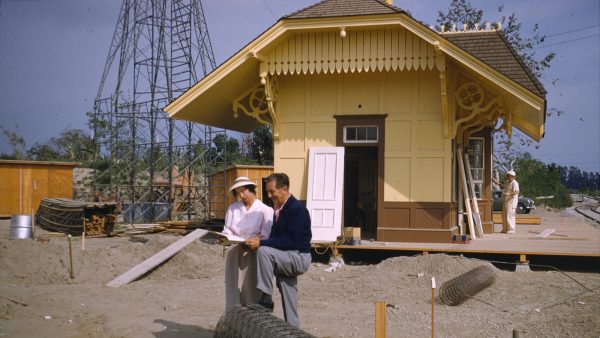 From The Cultural Landscape Foundation:

Born in Los Angeles, California, Shellhorn received career advice at a young age from her neighbor, landscape architect Florence Yoch. She attended the School of Landscape Architecture at Oregon State College before expanding her design repertoire at Cornell University’s College of Architecture.

Shellhorn returned to Southern California in the midst of the Great Depression and started her own design practice. During World War II she worked on the Shoreline Development Study, which established restrictions on oil drilling in Santa Monica Bay and became a precedent for the goals of the California Coastal Act. From 1945 to 1978 she designed landscapes and site plans for Bullock’s department stores, creating Modernist designs in a park-like setting that evoked a sun-soaked, leisurely lifestyle. In 1956, Shellhorn was hired by Disney, and is responsible for Disneyland’s comprehensive pedestrian circulation system, Entrance, Main Street and Plaza Hub, creating the small-town America feeling envisioned by Walt Disney.

During her 57-year career, she completed hundreds of private gardens, with clients including Spencer Tracy, Gene Autry and Barbara Stanwyck, and also designed numerous commercial projects, medical clinics, schools, and universities. Shellhorn was named a Fellow of the American Society of Landscape Architects in 1971.

A mere three months before Disneyland’s opening on July 17th, 1955, Ruth was hired by Walt Disney to serve as liaison between the “art directors” of each of the theme park’s original five “lands”—Tomorrowland, Fantasyland, Adventureland, Frontierland, and Main Street, U.S.A. She was the only woman on the creative design team. Almost inconceivably, at that late date, the park lacked a cohesive plan for pedestrian circulation—how guests would move about the park and experience the visual transitions between the lands. Ruth ultimately crafted plans and designs for the entry, Main Street, the pedestrian circulation, and more. One of my favorite images from this project captures Ruth and Walt Disney, standing amidst nothing but rolling dirt and construction debris, discussing ideas for the hardscape and landscape. In the background, we see the completed Frontier Station structure. What amazes me, having stood in—perhaps—that exact spot many times, is the date of the picture: July 2nd, only two weeks prior to opening day. I was not surprised to discover 1955 was the year the Los Angeles Times named Ruth “Woman of the Year”—the occasion of the portrait, featured above.