I still remember walking out of the movie theater 21 years ago yesterday after seeing The Matrix for the first time. I knew little about the film going in and couldn’t believe what I’d just seen coming out. My movie-mates were anxious to talk about it, but I couldn’t. I was speechless. Dumbfounded. For me, it was one of those rare occasions where a movie seems nearly pitch-perfect, where everything just works for you and you feel like you’re a slightly different person leaving the theater than the person who entered.

If Blade Runner is recognized as the gold standard of cyberpunk cinema, The Matrix takes home the silver.

To celebrate the 21 anniversary of the release of the film, Netflix now has the entire trilogy (The Matrix, Matrix Reloaded, and Matrix Revolutions) available online. I was as disappointed in the latter two films as I was impressed by the first. But your mileage may vary. 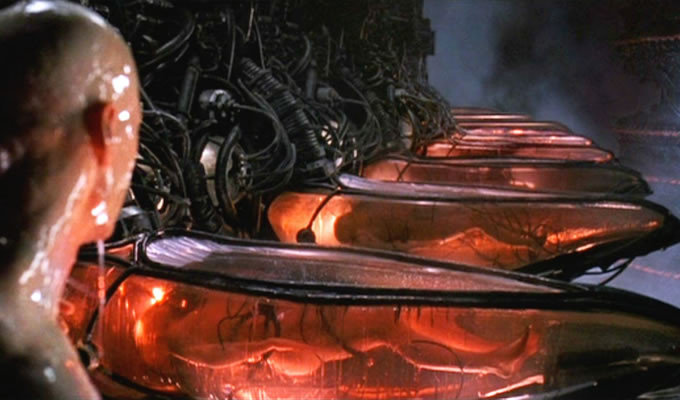 Here’s one thing worth pointing about about The Matrix, especially when assessing the relevance of cyberpunk fiction to our current reality. In the film (spoiler alert), AI entities literally harvest the electrical impulses of the world’s human population to power their silicon world. That was the one thing about the film where I had to suspend my disbelief. If I thought too deeply about it, it struck me as sci-fi movie hokum. But is it? Translating the poetic language of fiction to the more mundane terms of real life, aren’t Google, Facebook, Amazon, Instagram, and all of the rest of corporate cyberspace, feeding off of our electrical impulses as they track, record, target, and trade all of our actions online? We are little more than data points to them. And I’ll try not to get too paranoid think about how we have now literally quarantined to our domestic pods and will be largely virtualizing almost every aspect of our lives for the foreseeable future.

The Wachowskis might have been more frighteningly prescient than even they could have realized.

Comments Off on The Matrix turned 21 yesterday, Netflix releases the Matrix trilogy #cyberpunk