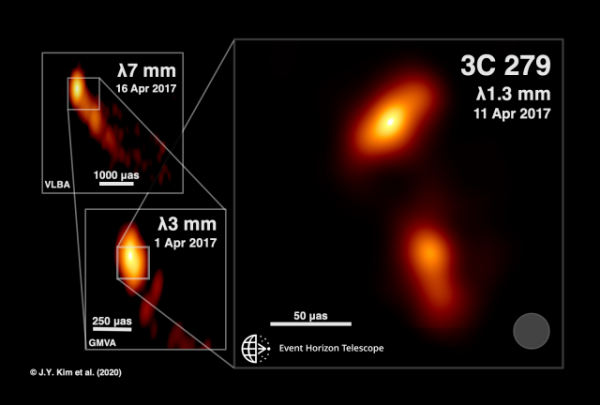 What is a blazar? In the center of most galaxies lurks a supermassive black hole. Nothing escapes a black hole, not even light. As black holes eat up everything that comes anywhere near them, an accretion disc of plasma forms around the singularity. Every once in awhile that plasma shoot out at close to the speed of light. A black hole that shoots out these plasma jets is a blazar. Why blazar?

Under the umbrella of blazars are all an active galactic nucleus with a jet composed of ionized matter traveling at nearly the speed of light. That category includes BL Lac objects and some quasars. Squish that together and you get blazar.

Crucially, the team say, the image is the highest resolution yet of a jet around a supermassive black hole, meaning the researchers can for the first time investigate what is happening near the base of the jet. Indeed a close-up image shows a blob near the black hole that appears to be slightly off the axis of the rest of the jet.

The image, published in the journal Astronomy & Astrophysics, was captured by the Event Horizon Telescope – a huge research effort involving a network of eight radio telescopes, and a large team of researchers, around the world.

Comments Off on Imaging Plasma Jets from Black Hole Blazars