Black hole bends light back on itself #Space @Caltech 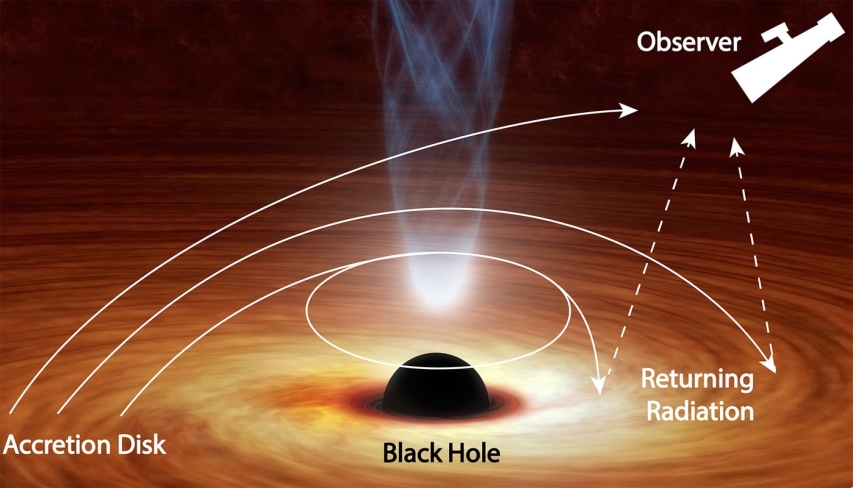 You may have heard that nothing escapes the gravitational grasp of a black hole, not even light. This is true in the immediate vicinity of a black hole, but a bit farther out—in disks of material that swirl around some black holes—light can escape. In fact, this is the reason actively growing black holes shine with brilliant X-rays.

A new study accepted for publication in The Astrophysical Journal offers evidence that, in fact, not all of the light streaming from a black hole’s surrounding disk easily escapes. Some of it gives in to the monstrous pull of the black hole, turns back, and then ultimately bounces off the disk and escapes.

Riley Connors, lead author of the new study and a postdoctoral scholar at the California Institute of Technology (Caltech) in Pasadena, California, says

“We observed light coming from very close to the black hole that is trying to escape, but instead is pulled right back by the black hole like a boomerang. This is something that was predicted in the 1970s, but hadn’t been shown until now.”

The new findings were made possible by combing through archival observations from NASA’s now-defunct Rossi X-ray Timing Explorer (RXTE) mission, which came to an end in 2012. The researchers specifically looked at a black hole that is orbited by a sun-like star; together, the pair is called XTE J1550-564. The black hole “feeds” off this star, pulling material onto a flat structure around it called an accretion disk. By looking closely at the X-ray light coming from the disk as the light spirals toward the black hole, the team found imprints indicating that the light had been bent back toward the disk and reflected off.

The scientists say that the new results offer another indirect confirmation of Albert Einstein’s general theory of relativity, and also will help in future measurements of the spin rates of black holes, something that is still poorly understood.

Read more from Caltech and the study “Evidence for Returning Disk Radiation in the Black Hole X-ray Binary XTEJ1550-564,” which was funded by NASA