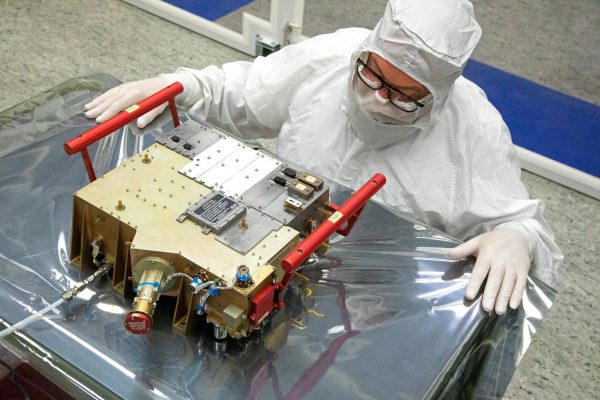 Dave Bowman was transformed via contact with alien intelligence at the end of Stanley Kubrick’s 2001: A Space Odyssey. He returned in 2010: The Year We Make Contact with a message: “All these worlds are yours except Europa. Attempt no landing there.”

The European Space Agency is throwing caution to the wind and plans to send the Jupiter Icy Moon Explorer to the moons of Jupiter. Recently they received their first completed instrument.

The instrument is dubbed the ultraviolet spectrograph (UVS), built by Southwest Research Institute (SwRI). UVS will conduct close-up observations of Europa, Ganymede, and Callisto, and record the UV light they emit. More from Universe Today:

Steven Persyn, an assistant director of SwRI’s Space Science and Engineering Division, is also the project manager for JUICE-UVS. As he stated in a recent SwRI press release:

“It has been a huge team effort to get this instrument – known as JUICE-UVS – built, tested and delivered. In 2013, UVS was selected to represent NASA on the first ESA-led mission to an outer planet. Meeting both NASA’s and ESA’s specifications was challenging, but we did it.”