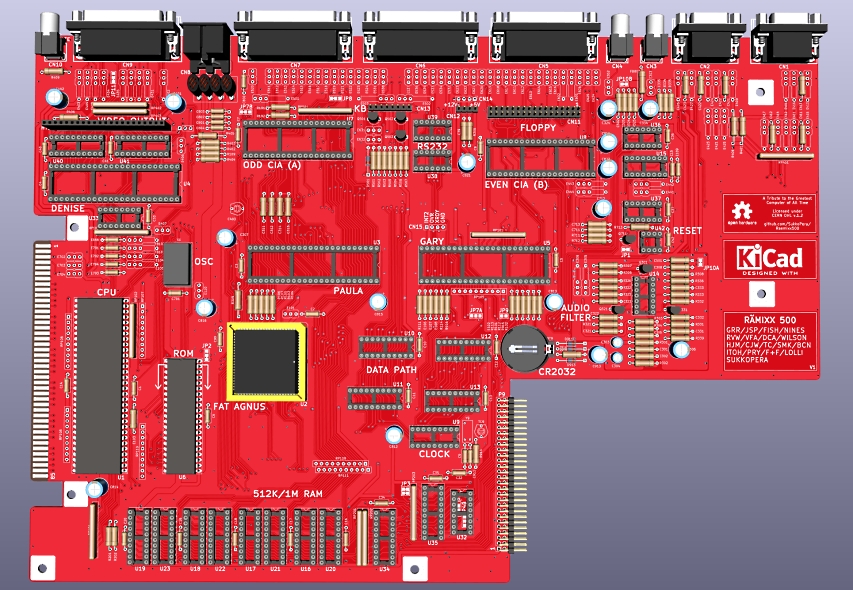 Rämixx500 is an Open Hardware remake of the Commodore Amiga 500+ mainboard, revision 8A.1, posted on Github by user SukkoPera.

Many Amiga 500+ computers are suffering an early death because of the built-in barrel battery that powers their internal real-time clocks. Such batteries have long exceeded their planned lives and in many cases have started to leak alkaline liquids over the mainboard, corroding copper traces and destroying components.

This damage can sometimes be repaired trivially, but many times it requires a lot of time and effort. Sometimes it adds up to other damage occurred over time and so it would just be better to have a new board built with new components to move the few critical chips over. Amiga mainboards haven’t been produced for the last 30 years, but they are relatively simple by today’s standards, thus an amateur project to make new ones was started.

SukkoPera warns the board design is untested but welcomes error reports.

The initial objective was to come up with a new mainboard as similar to the original one as possible, while including minor modifications that would improve its usability. First the schematics were drawn from scratch in KiCad and then the board was routed, staying close to the original layout.

This mainboard was designed with reasonable – not maniacal – accuracy to the original design. Most care was taken in the positioning of components that ought to be in a certain position (i.e.: screw holes and I/O connectors), to ensure drop-in replaceability. Other components and tracks are “more or less” there, but as the board was wholly laid out from scratch by hand, don’t expect sub-millimeter accuracy.

Deliberate changes with respect to the original layout of the A500+ rev.8A.1 board were made to provide a better experience.

See all the details on GitHub.