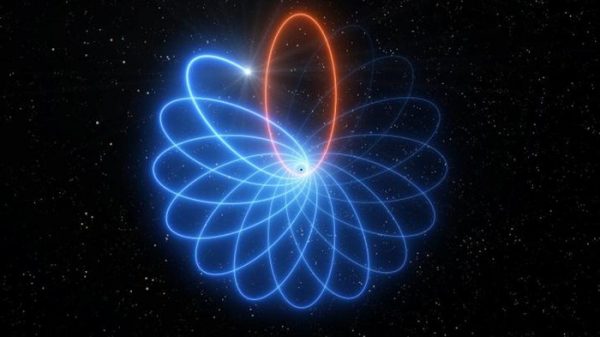 As strange and difficult as Albert Einstein’s Special and General Theories of Relativity were at the time, they made specific, testable, observable predictions. One of the bold predictions is an effect that has now been observed, called Schwarzschild precession. Here’s more from MOTHERBOARD:

[The star] S2 is a perfect natural laboratory to test out some of Einstein’s predictions about the environment near extremely massive objects, including a phenomenon called Schwarzschild precession. This precession occurs when an object is locked in a very close orbit with a much more massive object. Instead of tracing out the same elliptical orbit, as modeled in Newtonian physics, general relativity predicts that the smaller object will have an orbit shaped like a stenciled rosette, due to the curvature of spacetime around the massive object.