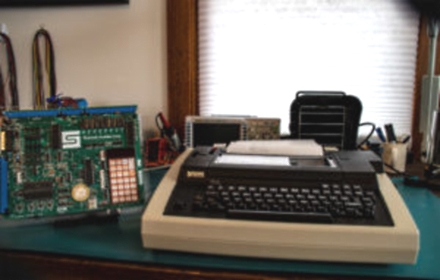 The SYM-1 is a 1975 era, 6502 based, 8-bit computing board. Galactic Studios has taken one cleverly upgraded and loads the 1970s/80s classic ASCII game Star Trek onto it, interfaced with a classic vintage dot matrix terminal.

I was using 8 bit computers back in the ’70s, and I paid my dues. But these days I’m too old to put up with assembly language or loading programs from tape. So when I bought a SYM-1, I designed an expansion board that added 32K of RAM, 32K of ROM that included BASIC, an assembler, and a DOS, and a modern emulator board for  the Commodore 1541 disk drive.

The SYM-1 came with space to plug in ROMs with BASIC, an assembler, and more. But the sockets were designed specifically for ROM chips, not PROMs (programmable ROMs) or anything newer. So I had the options of altering the SYM-1 (not something I want to risk with vintage hardware), plugging in PROMs via an adapter board (which would look ugly), or making a neat expansion board that would sit underneath the SYM-1. Which, obviously, is what I ended up doing.

I could just use my PC and a USB-to-RS-232 interface cable to talk to the SYM, but that’s too modern. I could buy a vintage dumb CRT terminal, but the experience is too similar to using my PC’s computer screen. So I bought a DECwriter… it’s the DECwriter Correspondent, a portable terminal with a built-in acoustic coupler modem, from 1986. But it’s still a noisy dot matrix terminal, and that’s what counts.