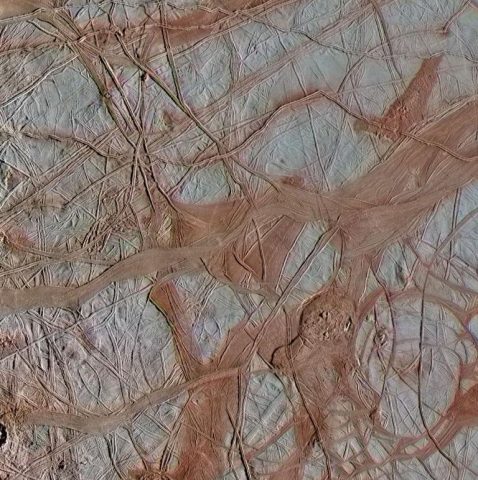 Folks used to believe there were canals on Mars. Astronomers in the late 19th and early 20th centuries observed lines in the equatorial regions or Mars. Modern high-resolution mapping of the Martian surface by spacecraft shows no such features. these “canals” proved to be an optical illusion. What Mars does have is what astronomers call Chaos Terrain, a place where surface features like plains, ridges, and cracks are all jumbled together, appearing chaotic. But space always has surprises. Newly reprocessed high definition images have shown that there is spectacular Chaos Terrain on the Jupiter’s moon Europa. More from Universe Today:

There’s a lot of scientific debate about Europa’s surface, and what causes the Chaos Terrain. Impact events where the impactor penetrates the ice surface into a liquid crust is one possibility. Or it might be because of the heating and stretching that Jupiter’s gravity forces on Europa, and how the sub-surface oceans respond to that. Scientists think that Europa’s lines are caused by eruptions of warm water, and that lineae are sort of like cracks between tectonic plates.

Comments Off on Stunning, Newly Reprocessed Images of Europa #SpaceSaturday